UPDATE (1/15/2021, 8:40 PM ET): Dr Dre has been released after the scary ordeal. News that the Beats founder was released from hospital Friday was reported by TMZ, who noted he will be under close watch by medical professionals at his home in the Pacific Palisades.

His friend and fellow rapper Ice T, 62, took to Twitter with a supportive message. “Update: Just FaceTimed with @drdre,” he wrote on Jan. 15. “He just made it home. Safe and looking good,” he added.

Update: Just FaceTimed with @drdre He just made it home. Safe and looking good. 🙏👊🏽

UPDATE (1/5/2021, 11:40 PM ET): Dr. Dre is on the mend! The famous rapper gave fans a happy update a few hours after TMZ reported that Dr. Dre suffered a brain aneursym, which led to an emergency hospitalization, on Jan. 5. “Thanks to my family, friends and fans for their interest and well wishes. I’m doing great and getting excellent care from my medical team. I will be out of the hospital and back home soon. Shout out to all the great medical professionals at Cedars. One Love!!,” Dr. Dre wrote in an Instagram post, which you can see below. 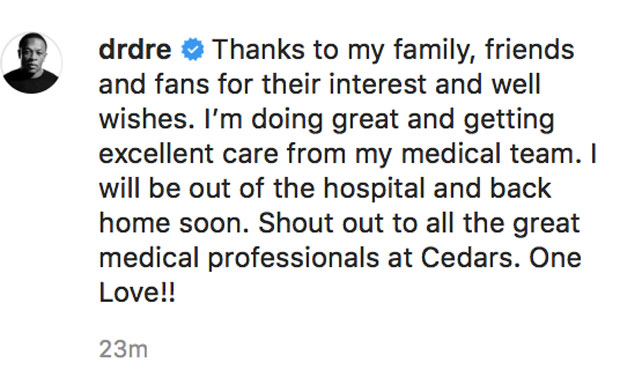 ORIGINAL: Celebrities are sending their prayers and well-wishes after Grammy-winning rapper and record executive, Dr. Dre, reportedly suffered a brain aneurysm. The 55-year-old icon is currently in the ICU at Cedars-Sinai Medical Center in Los Angeles after suffering the aneurysm, TMZ reported on Jan. 5. HollywoodLife has reached out to Dr. Dre’s rep and lawyer for comment, but did not hear back by the time of publication.

LL Cool J, however, had optimistic news to share. “Dre is recovering nicely,” the rapper, who collaborated with Dr. Dre on the 1998 track “Zoom,” tweeted a little over an hour after the report surfaced. Meanwhile, other celebrities took to Twitter to send their support to Dr. Dre (born André Romelle Young).

Related: Dr. Dre’s Health: Everything To Know About His 2021 Brain Aneurysm & Recovery

“PRAYERS UP FOR DR DRE,” rapper G-Eazy tweeted with a broken-heart emoji, while Ice Cube shared a throwback photo of Dr. Dre attending his star ceremony on the Hollywood Walk of Fame in 2017. “Send your love and prayers to the homie Dr. Dre.,” Ice Cube wrote for his friend, whom he used to rap alongside in the hip-hop group N.W.A. Dr. Dre and Ice Cube went on to co-executive produce a movie about their group in 2015, called Straight Outta Compton (named after N.W.A.’s debut studio album).

PRAYERS UP FOR DR DRE 💔

Even more music icons shared messages for the founder of Aftermath Entertainment and Beats Electronics. “Prayers up for Dr. Dre and his family for healing & Strength over his mind & body,” Missy Elliott, who contributed guest vocals alongside Dr. Dre to Knoc-turn’al‘s 2002 track “The Knoc,” tweeted. Rapper Juicy J also chimed in, tweeting, “Noooooo not Dr Dre [prayer hand emojis] praying for a speedy recovery.”

Noooooo not Dr Dre 🙏🏿🙏🏿🙏🏿 praying for a speedy recovery

Terry Crews also shared a tweet for the former co-owner of Death Row Records. “Praying for Dr. Dre right now,” the Brooklyn Nine-Nine star wrote, while T.I. shared a throwback photo of himself shaking hands with Dr. Dre in a studio. “Shake back Doc. We all need U….,” the rapper captioned the post.

Even 50 Cent shared a message, after Dr. Dre’s daughter Truly Young called out the rapper on Instagram in Sept. 2020. 50 Cent shared a photo with Dr. Dre at an event (pre-pandemic), writing “get well dre” and “stress kills relax.” Like 50 Cent, LeBron James also shared photos of himself with Dr. Dre. “Praying for you my Brother!!,” the Los Angeles Lakers star wrote on Instagram.

A brain aneursym is a “bulge or ballooning in a blood vessel in the brain” which can leak or rupture, thus leading to “bleeding into the brain (hemorrhagic stroke),” according to the Mayo Clinic. Game of Thrones star Emilia Clarke was another big star who has suffered from brain aneurysms.

Four months before this hospitalization report, Dr. Dre also made headlines after his estranged wife, Nicole Young, requested temporary spousal support in the amount of $1,936,399 a month, according to court documents that HollywoodLife reviewed in Sept. 2020. Nicole had also asked for $5 million to cover her lawyer fees for their divorce, which she filed for over “irreconcilable differences” in June of 2020 after 24 years of marriage. The divorce is ongoing; Dr. Dre and Nicole share two children, their son Truice, 23, and daughter Truly, 19.