Valerie Bertinelli joined TODAY live on Monday, which marked her first public television appearance since the death of her ex-husband Eddie Van Halen. The legendary guitarist died at the age of 65 on October 6 after a lengthy battle with cancer. The Hot in Cleveland star, 60, who appeared on the morning show to share one of her favorite healthy dishes, teared up while discussing the heartbreaking loss.

Valerie, who had called into the show via video from her home, replied through tears: “It’s so good to see you guys too. I don’t know why I’m tearing up,” she said, explaining, “You know when you hear voices and you see people you feel a connection with and… you guys always make me tear up.”

She continued by updating Hoda and hosts Savannah Guthrie and Carson Daly about how she’s been handling her ex’s passing. “It’s been rough, very bittersweet. We’re doing okay,” Valerie said. We spent the holidays together. I’ll see [her son] later today.”

“It’s hard,” she continued. “I’ve gone to text him a few dozen times and I’m like, ‘Oh I can’t text him right now,'” Valerie admitted, before thanking Carson for “that lovely piece you did on Wolfie” in for Today in November. “It really touched my heart and you handled him and you were so good to him, and as a mom, thank you so much for treating him so well,” she said.

On October 6, 2020, Valerie and Eddie’s son confirmed the rocker’s death in a heartbreaking announcement on social media. “I can’t believe I’m having to write this, but my father, Edward Lodewijk Van Halen, has lost his long and arduous battle with cancer this morning,” Wolfgang wrote in a statement on Twitter alongside a smiling photo of the musician.

“He was the best father I could ever ask for. Every moment I’ve shared with him on and off stage was a gift. My heart is broken and I don’t think I’ll ever fully recover from this loss,” he continued, adding, “I love you so much, Pop.” 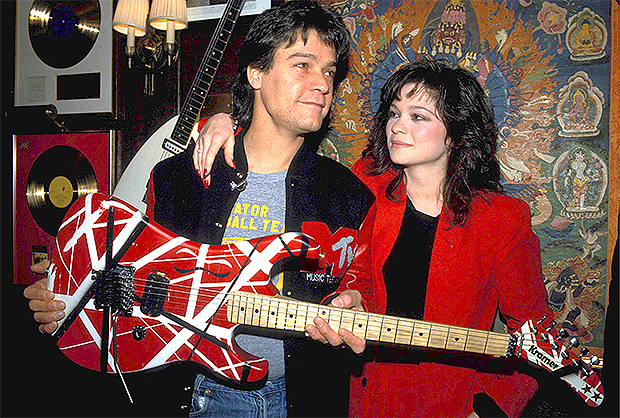 At the time of his death, Valerie mourned Eddie in a heartfelt statement, which included a throwback photo of the couple holding baby Wolfie. “40 years ago my life changed forever when I met you,” the actress wrote, noting that she was by Eddie’s side in his last moments. “You gave me the one true light in my life, our son, Wolfgang. Through all your challenging treatments for lung cancer, you kept your gorgeous spirit and that impish grin. I’m so grateful Wolfie and I were able to hold you in your last moments,” she continued, adding, “I will see you in our next life my love.” In addition to her post, Valerie, at the time, shared a number of family photos to Instagram that showed milestone moments through the years.

Valerie and Eddie, who wed in 1981, were married for 26 years before they split in 2001. The pair, who finalized their divorce in 2007, remained close friends and even attended each others’ weddings. The actress and rock icon met in 1980 when Valerie’s brothers invited her to a Van Halen concert in the hopes that she could get them backstage.