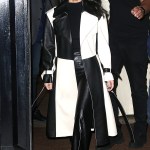 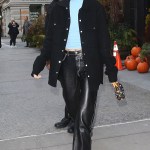 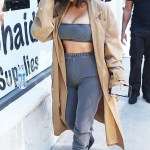 Kim Kardashian got trolled on social media after fans thought that her sister, Kourtney, was ‘photoshopped in’ to a family snap taken during their Lake Tahoe getaway!

Fans had some questions for Kim Kardashian after she was accused of photoshopping big sis Kourtney into the family photo from their trip to Lake Tahoe! It all started when Kim took to her Instagram and Twitter accounts on December 23 to share a photo of the Kardashian clan in Lake Tahoe. The image featured Kris Jenner, Corey Gamble, Kendall Jenner, Khloe Kardashian, Scott Disick, Kim, and Kourtney — who looked slightly different than her family members.

Social media users immediately took to the comment sections of both the Instagram and Twitter posts to dish their thoughts on Kourt’s placement in the pic. “why does kourtney looks [SIC] like an added ghost,” one person wrote on Twitter. “It looks more like someone got heavy handed with the shadow boost tool,” another person chimed in on the social media platform.

Even on Kim’s Instagram page, people were questioning whether Kourt went to Lake Tahoe at all! “Why does Kourt look photoshopped in,” one person asked. Another person went a step further and said that “half of them look edited into the picture LMAO.” Unfortunately for Kim, this isn’t even the first time she’s been accused of photoshopping a photo!

Just over two months ago at the end of October, Kim was accused of photoshopping yet again when a picture of her, Khloe and Kourtney from the SKIMS mogul’s 40th birthday getaway surfaced online. In the image, the three sisters posed in bikini clad attire, but something was missing — notably Kim’s right arm! “Where’s your arm tho???” one person asked on the post. “Who needs an arm when you have a nice waist,” another person said.

Kim’s photoshopping ethics have been questioned before. In previous years, she’s been accused of slimming down people in her photos, and even altering her own children’s hair in posts on Instagram. Kim hasn’t been the only culprit, though. Even Khloe has been accused of photoshopping her images, too. Hopefully fans will learn if Kourtney was photoshopped into the snap!