The moment we’ve all been waiting for is coming on the Dec. 17 episode of Jersey Shore — Angelina Pivarnick will arrive in Las Vegas! That means she’ll come face-to-face with Deena Cortese for the first time since she flipped out on her, Jenni “JWoww Farley” and Nicole “Snooki” Polizzi for what they said in the speech they made at her Nov. 2019 wedding. Going into the Vegas trip, which was filmed in September, 10 months after the wedding, Angelina knew she was meeting up with the guys, but had no idea if JWoww and Deena were going to be there, too. (Snooki is not part of the Jersey Shore cast this season).

“I felt very uneasy,” Angelina told HollywoodLife EXCLUSIVELY. “I was like…what the hell is going to happen to me when I walk through these doors? The boys always have something up their sleeves and you never know what you’re going to get with them. [What happens] is shocking. We didn’t even have to go out to clubs and bars for this crazy s*** to happen.” 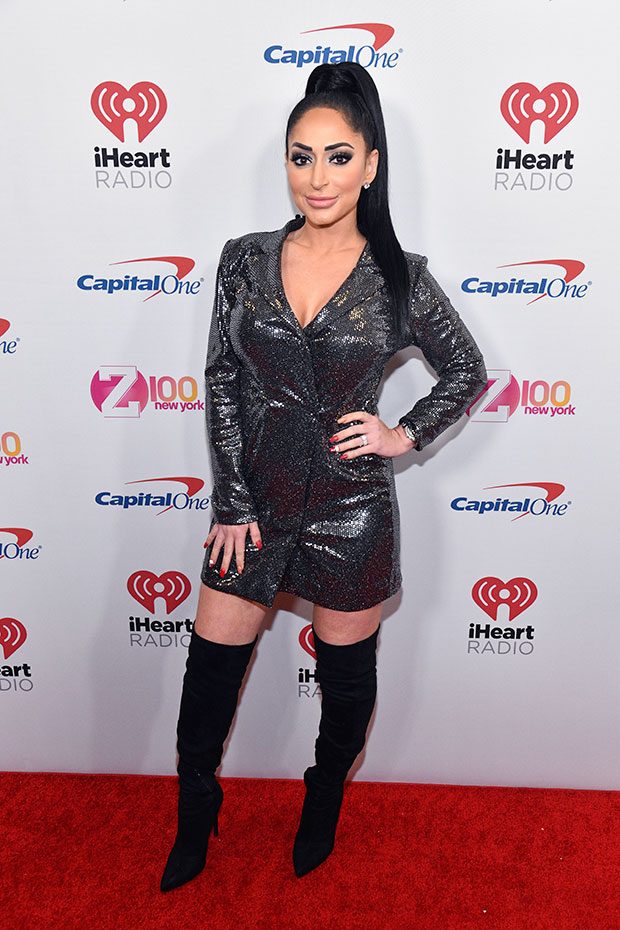 As viewers know, JWoww was unable to make it to Vegas, as she was covering from a procedure she had done on her face. Deena was there, though, and the boys didn’t warn her that Angelina would be coming. JWoww and Deena had made it very clear that they didn’t want Angelina to be part of their lives anymore due to her reaction to the speech, as well as her comments dissing them on social media in the months that followed.

For several months, Angelina felt the same way, but by the time the trip to Vegas happened, she was ready to move on. “It was ten months [since the wedding] at that point,” she explained. “I was definitely ready. I felt like enough time had passed and I was like…you know what. I’m not even angry anymore. I’m still a little hurt, but I’m willing to put my best foot forward and see them again. I wanted to sit down with them to figure out where they were at and see if they were even willing [to see me].”

However, she stands by how angry she got at the wedding speech, which roasted her big time. While Angelina understood that the girls were just joking around, she felt they took it too far. “I’m a jokester. I’m an open book and I say the craziest things. That’s just my personality — I’m funny and sarcastic. But [your wedding is] the one night of your life you want to look back on and remember happy moments,” Angelina said. “But listen, things happen. [By Vegas], I was just trying to have positivity and go forward with everything.”
Watching the recent episodes back, was there anything that the girls did or said that surprised you? I was kind of taken aback that they didn’t want to sit down with me. They were so mad at me. Meanwhile, I’m the one who should’ve been really mad. I was taken aback that they felt that way. They played a really big part in this. Even though I did comment on social media about them being mean girls…it was rightfully so. At that point, my feelings were my feelings and I was very hurt. Did I have to write the mean girl comments? No, but I was hurt. So watching the episodes airing now I’m like..what the hell is going on here. They were on social media, too, and they did the most disgusting speech at my wedding!
Snooki isn’t on the show this season, but where do you stand with her? Snooki did go on her podcast recently and I was just taken aback. I don’t know if it was Joey, or someone asked her something, and she was like, ‘I’d rather cut off my limb than ever talk to Angelina again.’ Are you serious? At this point, I don’t know what the future holds. She’s obviously still hurt about it and pissed off. That’s where we stand now.
Would you be willing to sit down with her to hash things out? I’ve been willing to sit down with her this whole time! I’ve said [in interviews] I want to sit down with her and talk to her and have whatever she feels come out and I’d like to tell her how I feel. That’s what adults do. So whenever she wants to, I’m here. Nicole, come have a sit down with me!
New episodes of Jersey Shore: Family Vacation air on Thursdays at 8:00 p.m. on MTV.
Related Link

Related: Maria Callas: 5 Things To Know About Opera Singer Angelina Jolie Will Portray In Next Film