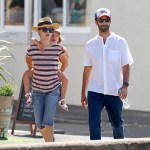 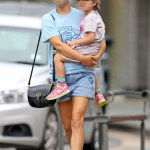 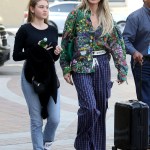 Kate Hudson posted the sweetest photo of her three children — ages 2-16 — having fun together in a candid family moment. Check out the rare photo of Kate’s adorable youngsters!

Fans of Kate Hudson can’t remember the last time they saw all three of her sweet kids in one photo, but now they got the latest look at the actress’ two sons and baby girl. In a December 14 post to Instagram, Kate captured all three of her kiddos — son Ryder, 16, son Bingham, 9, and daughter, Rani, 2 — bonding in their family home. Ryder looked so grownup, sitting in a chair with his feet hanging off of one of the arm rests and showing his baby sister something on his phone

Rani looked extra cute, smiling gleefully at her big brother’s phone screen. Bingham simply looked on while sitting on one of the other chairs. “Got ‘em again,” the siblings’ Oscar nominated mom, 41, began the caption to her post. “3 in 1 pic,” she said, adding two emojis. Kate also wrote the hashtags “thank god for FaceTimes” and “once in a blue moon,” referencing just how difficult it is to capture all three of her youngsters at once.

It is very rare for Kate to share images of all three of her children in one photograph. In fact, all over her Instagram account, there are either photos of each of her children, individually, or just two of the three together! Just one day before sharing the above candid photo of her children, Kate took to Instagram again and shared the below image featuring her two sons helping her with the groceries. In the pic, it was so clear to that Kate’s eldest, Ryder, is already taller than she is!

Of course, there are very adorable photos of little Rani scattered all over Kate’s Instagram account, too. The mother-of-three loves nothing more than doting on her kiddos, and it’s been so fun for fans to get small glimpses of their childhood via Instagram! With the holiday just around the corner, Kate’s longtime Instagram followers might even be treated to another photo of the trio — but we’ll have to add that to our Christmas wish list.

Kate welcomed her eldest son, Ryder, with ex-husband Chris Robinson in January 2004. The couple split in 2007 and the parents share joint custody of their son. In July 2011, Kate and her former partner Matt Bellamy welcomed Bingham, before they ultimately split in December 2014, opting to co-parent their son. Just over two years ago, in October 2018, Kate announced the arrival of her and boyfriend Danny Fujikawa‘s daughter, Rani!