Kate Hudson, 39, and Danny Fujikawa, 32, welcomed their little girl Rani Rose to the world on Oct. 2, and we’re finally getting a video of her! Although Kate has two boys of her own, Ryder Robinson, 14, and Bingham Bellamy, 7, her boyfriend Danny is all new to parenthood — but he seems to have the hang of it already! In fact, he looks like he’s in heaven in the adorable video Kate posted of the father/daughter pair to her Instagram on Oct. 12. With the Patty Griffin song “Not Alone” playing over the footage, she recorded an adorable moment between Danny and Rani. “Kind beautiful man, your pure love is such a gift,” she wrote, along with “#daddysgirl.” It doesn’t get much cuter than that.

In the video, Danny holds his little one in his lap and rubs the sides of her head with his thumbs. Although Rani’s eyes are closed, she isn’t asleep and begins moving her arms. She manages to grab onto one of Danny’s fingers and doesn’t let go. The new dad looks over at Kate and says something inaudible, although it looks like he calls her “beautiful.” After that, Danny leans down to give his daughter not one, but two forehead kisses. Aw! And if you think reading about their father/daughter bond is a heart-melter, you’ll never be able to handle the real thing with the soft lyrics and teeny little baby.

This isn’t the first time we’ve seen Rani — and she just keeps getting cuter! While she had on a onesie this time around, she was swaddled up in a striped blanket and bow hat when Kate first showed her off on Instagram on Oct. 6. 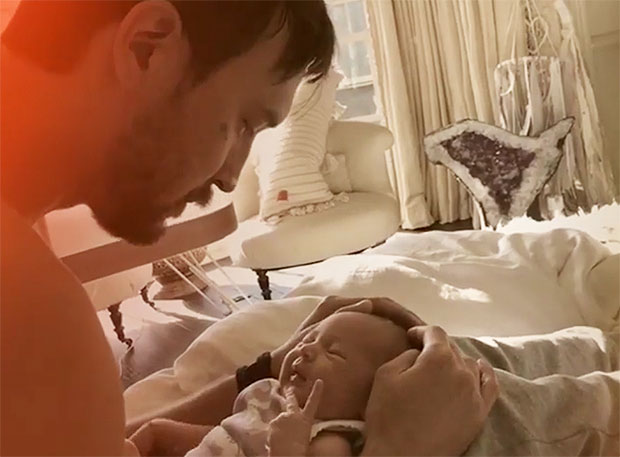 Kind beautiful man, your pure love is such a gift #daddysgirl 💕

Here’s to hoping Kate keeps letting fans follow along with Rani’s early months! She was so open during her pregnancy, sharing one bare baby bump pic after another, and we can’t wait to watch her tackle parenthood for the third time with Danny.