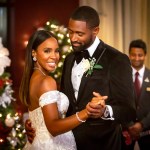 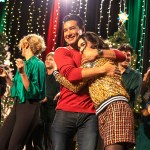 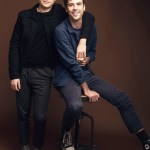 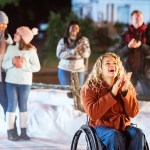 AnnaLynne McCord stars with Mario Lopez in the Lifetime movie ‘Feliz NaviDAD.’ HL spoke EXCLUSIVELY with with her about why she loves ‘wonderful’ holiday films after being a ‘Christmas romance movie hater.’

Feliz NaviDAD is the latest holiday film from Lifetime’s It’s A Wonderful Lifetime lineup. The movie premieres Nov. 21 at 8 p.m. The film follows David (Mario Lopez), a high school principal whose daughter (Paulina Chavez) is ready for him to up his dating game. He meets Sophie (AnnaLynne McCord), and there’s an immediate connection between them.

HollywoodLife talked EXCLUSIVELY with AnnaLynne ahead of the movie’s premiere about her latest holiday romance. She teased Sophie and David’s love story and revealed what it was like filming amid the COVID-19 pandemic. AnnaLynne admitted that she loves doing holiday films because of her mother and confessed she used to be a “Christmas movie romance hater,” but now she loves them. Read our Q&A below.

Tell me a little bit about your role in Feliz NaviDAD and working with Mario Lopez.
AnnaLynne McCord: First, I really have to say hats off to Lifetime for just really going the distance as far as inclusion and creating just an incredible spread of diversity and not these kinds of stereotypical stories you’ve seen in the past. They really just take the love stories of the season and give them different backgrounds and different orientations. I think they did such an incredible job. So I have to say that first and foremost. Secondly, doing Feliz NaviDAD was amazing, because this is literally my mom’s favorite song ever. The reason I do Christmas films is because of my mother. Working with Mario Lopez…I had kind of a conservative upbringing, so I was allowed to watch Little House on the Prairie. It was so funny because my sisters and I would see the credits for Saved by the Bell rolling into Little House on the Prairie. We weren’t allowed to watch Saved by the Bell. But all of my girlfriends my age were. I feel like they did such a good job with Feliz NaviDAD to tell just a really funny, charming story of this dad who clearly loved his wife and experienced loss, and the holidays are always a hard time for that. I think people will relate to that, especially this year. His daughter is trying to get him back out there and get him into the 21st century on a dating app, and then we upon each other. It’s just a fun rom-com that’s set in the holidays.

What can you tease about Sophie and David’s relationship? What draws them to each other?
AnnaLynne McCord: The really fun dichotomy between them is that he’s very uncertain about this whole new dating thing. She doesn’t live in the town that he lives in, so they kind of hit it off in this joking way with each other that they’re going to practice dating with each other. They’re not taking the relationship seriously, which is what I thought was really charming about the storyline. It was very unique. It wasn’t an overt romance. It was kind of like they were both saying that this was never going to work out. It’s a holiday film, so you can imagine how it might end, but there’s a really great dynamic where they’re not wanting to fall in love with each other and life happens, as it always does.

David does have a daughter. What is Sophie’s relationship like with Noel?
AnnaLynne McCord: It’s really cute. I love this because I have some stepkids of my own. You never know how it’s going to work out. Are they going to like me? I’m very lucky to have beautiful relationships with all four of my stepkids. Noel is so focused on her dad’s happiness. She wants to see her father’s smile, and she sees this connection building between Sophie and David. She picks up on it before he does, so she kind of builds a relationship with Sophie outside of that. There is a really sweet connection. They both share an interest in music, and Sophie becomes a part of Noel’s school program. They kind of have their own little connection.

What do you love about doing holiday films?
AnnaLynne McCord: Literally, the first answer is I do it for my mom. I do it for my mom, first and foremost. But after that, after doing a couple of them, I’ll be very honest with you. I was a Christmas romance movie hater because I used to be super jaded. Love was not my thing. Once I figured out my anger issues, I now feel like these are the most wonderful films. As an actor, you want to make people feel something. You want to make people smile. You want to bring joy into their lives, especially this year. We were like one of the first films from DGA following COVID, one of the first ones allowed to film. We’d been in lockdown for the last three and a half months, and to see Santa Claus and Christmas trees, it made us happy to be a part of this. We knew that we were going to hurry as fast as we could because we were three months behind on filming to get this film out and the other films that Melissa Joan Hart was directing with Lifetime so that people could have some sense of normalcy this holiday season with their films that they expect to see with Lifetime for Christmas. So honestly, specifically this year, it was just meaningful to do something that I feel like will mean something in the homes of so many people who have gone through so much in 2020.

What was it like on set being one of the first productions back after the COVID shutdowns?
AnnaLynne McCord: It was very tricky. There was definitely a mixed situation where we really wanted to tell this beautiful story, but the story had this massive festival with a whole bunch of people. We had to change things around because it was written for a pre-COVID era, and we were smack dab in the middle of it. There were adjustments that had to be made. On the set, our medic was from the Medical Board of Nevada. The governor came to visit set. We had the unions come visit the set. Everyone was watching us like a hawk. The governor actually said, “If things don’t go well with this film, we’re not opening up the two other projects.” We really were navigating this whole unprecedented issue for the first time. I think that we had our moments where production got shut down. Things had to be reassessed and thankfully didn’t last very long. We were able to get back on track, but there was definitely a dichotomy of really knowing on the one side that we are technically nonessential and knowing on the other side that we have to do everything we can to make this process go smoothly. Because art is essential. In a time like this, we really do add value to people’s lives when they can sit down with their families, the families that they’re allowed to see in this period and do something that they’re used to doing every year to make them feel that not everything in the world has changed.