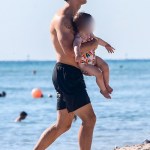 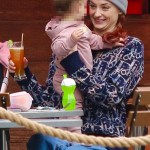 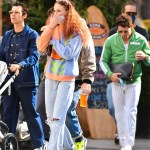 Sophie Turner is one stylish new mama. She changed out of sweats and wore a pinstripe black blazer while taking her baby daughter Willa out for a walk with husband Joe Jonas.

Sophie Turner and Joe Jonas have made sure that their three-month-old daughter Willa gets plenty of daily doses of mother nature and fresh air. The couple regularly take their little one on strolls around their neighborhood, which is also a great way for the 24-year-old actress and the 31-year-old singer to get some sunshine and exercise as well. On Nov. 13 the pair cut stylish figures while pushing Willa in her baby buggy, with Sophie losing her usual look of sweats for the walk.

Sophie wore a chic black blazer with white pinstripes as she pushed Willa’s buggy. The former Game of Thrones star paired it with a dark grey undershirt and leggings for a fashionable yet casual stroll. Sophie wore comfy trainers on her feet and had her blonde locks pulled up in a high ponytail with a small black scrunchie. Despite the presidential election being nine days prior and already declared in Joe Biden‘s favor on Nov. 7, she still wore her black face mask with the word “vote” written all across it.

Joe looked chic in a white t-shirt with a matching windbreaker over it. The jacket featured colorful bright cartoon faces across it with bright smiles and exaggerated noses. The DNCE member wore faded jeans and black Chuck Taylor style sneakers as he walked alongside his wife and baby girl. His dyed pink hair from early October is now gone, and Joe is back to rocking his natural brunette locks, which are still in a short buzzcut.

At one point the pair stopped and each seemed to reach into the buggy to give attention to their little one. A lavender blanket with magenta and purple patterns covered the buggy’s top to protect Willa from the bright L.A. sun, as well as any intrusive paparazzi lenses. While the couple seem to be okay with being spotted on their daily walks, they’ve remained guarded about their little girl. The pair has yet to share a photo of Willa to the world since her July 22, 2020 birth.

Sophie has to be happy with the outcome of the U.S. election. She let the world know she was a huge fan of Kamala Harris, 56, with an Aug. 12 Instagram photo shortly after now President-Elect Biden announced her selection as his running mate. The actress wrote, “My heart is so full…this is big,” in the caption showing a smiling Harris, who has become our nation’s first female, first Black and first Asian-American Vice President-Elect. On Nov. 7 when the election was called in favor of the Biden-Harris ticket, Sophie shared a photo of the pair with their arms raised in victory with a heart emoji as her caption.