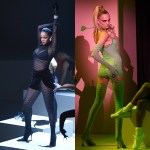 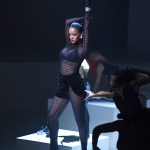 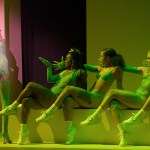 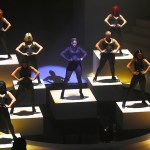 Rihanna looked ready to hit the runway in a new preview for her Savage x Fenty Show Vol. 2, which arrives on Prime Video in just one week! Check out the clip, featuring all new fashions from her brand, here!

The first teaser for Rihanna‘s Savage X Fenty Show Vol. 2 is finally here and we’re ready to see some fab looks on the runway. In the preview clip, courtesy of Amazon Prime, Rihanna appears first, strutting her stuff in black fishnets and a long black robe with her name written in gold lettering on the back. The mogul, 32, also rocks a totally new ‘do, sporting a mullet with hair that runs past her shoulders.

As Rihanna glances back to the camera, the tempo quickens and suddenly fans are hit with brand new looks worn by Riri’s models. Varying body types are put on full display, and all of the models look so powerful in the pieces ranging from lingerie to fishnet and latex looks. Of course, there’s also a ton of choreography, which will be in plenty for a slew of performances that Riri has promised. The show will also feature Lizzo, Willow Smith, and even more stars.

Last year, the artist and mogul partnered with Prime Video to give her fans a look at the show from the comfort of their very own homes. The 2019 fashion showcase, which occurred on September 10, took place at the Barclay’s Center in Brooklyn and left fans stunned. Not only were the fashion choices on point, but Rihanna gave her fans a true show when she took the stage to perform.

Having partnered with so many incredible women like Megan Thee Stallion, Christina Millian, and Sydney Sweeney as ambassadors to the brand, Rihanna has shown that including models with a range of body types was vital to her fashion line. It was important for her to give women a platform to feel “celebrated in all forms and all body types and all races and cultures,” she told The New York Times in September 2018.

As such, the models Rihanna brings into her fold represent the type of woman the mogul wants to see wearing her lingerie — every woman. The Savage X Fenty Vol. 2 show debuts on Amazon Prime Video on October 2. Remember, the only way to watch Rihanna’s show is if you’re an Amazon Prime Member. If you’re not an Amazon Prime member, you can get a 30-day free trial right now – or time it to shop the deals during Prime Day. See free trial details here.