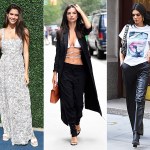 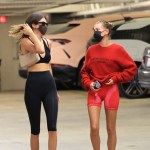 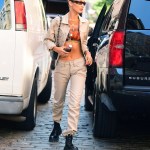 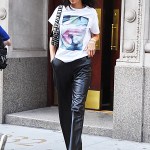 Kendall Jenner, 24, and Hailey Baldwin, 23, stepped out for a grocery run! The two models were spotted at Whole Foods in Los Angeles on Monday, Sept. 7, twinning in ’90s-inspired bike short ensembles. Kendall opted for a longer black pair, adding a matching crop top, sunglasses and her sister Kylie Jenner‘s go-to handbag: the $775 Prada 2000 Re-Edition nylon handbag in “Cameo Beige.” She kept her sleek brunette locks straight and down for the casual outing, also wearing her brown face mask from sister Kim Kardashian‘s SKIMS line and finishing her look with a pair of Kanye West‘s sold-out Yeezy resin slides.

Hailey twinned in a red pair of shorter bike shorts, adding black sneakers and a red logo sweater from contemporary line Comme des Garçons. The BareMinerals model rocked a protective black face mask, and kept her blonde hair tied back into a tight bun. They duo were spotted in the produce department of the healthy grocer, as Kendall loaded up on what appeared to be a bag of avocados and later making their way through the parking lot.

Kendall and Hailey have been inseparable lately, recently vacationing together with Hailey’s husband Justin Bieber, 26, and Kendall’s rumored new beau Devin Booker, 23, in Idaho! The group were also joined by Justin’s longtime tour manager Ryan Good, and were spotted going for a nature filled walk on Sept. 3. Since returning to L.A., Kendall and Devin have stepped out on back-to-back dates, hitting up Italian restaurant Giorgio Baldi in Santa Monica, celeb hotspot Nobu with Kylie and the exclusive Soho House.

The Keeping Up With The Kardashians star has yet to confirm her romance with Devin, and sources have previously shared she’s taking things slow. “Kendall is still saying this is still sort of casual and she’s seeing where it goes…she has no desire to settle down with anyone anytime soon,” an insider revealed to HollywoodLife EXCLUSIVELY. “Kendall is the kind of girl who’s very quiet, reserved and shy and takes time to get that connection. She likes to be at home with her dogs and be alone most of the time, so this is great for her,” they also said.