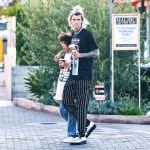 Machine Gun Kelly spent some quality time with his 12-year-old daughter, Casie, in West Hollywood. The two enjoyed a dinner at BOA Steakhouse, as MGK’s romance with Megan Fox gets more serious!

Machine Gun Kelly might be a famed rocker and rapper, but he’s also a doting father-of-one. On August 18, MGK, born Colson Baker, 30, treated his 12-year-old daughter, Casie Colson, to a father-daughter dinner in West Hollywood. The pair got dressed up for their night out at BOA Steakhouse, with MGK rocking a pair of black and red pants with matching red jacket and black top and his daughter looking super sweet in a dress with navy top and white skirt.

Ever the protective father, MGK put his arm around Casie as the two walked outside of the restaurant. The cameras didn’t seem to faze Casie, who was photographed checking out her phone while carrying a small purse and what appeared to be a backpack over her shoulder. The pair undoubtedly enjoyed some bonding time together, as MGK’s romance with his new flame, Megan Fox, continues to heat up.

The actress, 34, and rapper have been together now for well over three months, after they were spotted driving around on Megan’s 34th birthday in May. The pair have also gotten a lot more comfortable showing off their adoration for one another, posting pics of each other more frequently on social media, and spending more time together on dates and excursions away from the purview of prying cameras, like their recent trip to Puerto Rico in July. But as well as their romance is going, the two are definitely keeping their kiddos in mind.

“MGK and Megan are respecting their kids’ thoughts and their exes decisions on when to meet each other,” a source shared EXCLUSIVELY with HollywoodLife at the end of June. “The thing about them both is that they are having fun with each other without the kids. Kids are talked about, but [Megan and MGK’s] relationship is currently heavily all about themselves. They want to establish what they can become and, if it gets serious enough to get kids involved, then those roads will be tackled.”

Megan shares three sons with her ex Brian Austin Green — Noah Shannon Green, 7, Bodhi Ransom Green, 6, and Journey River Green, 4. Both MGK and Megan are co-parenting their youngsters with their former partners, while balancing their newfound relationship, which is still in its early stages. But as Megan and MGK’s relationship continues to grow, bringing their kids into the fold will absolutely be a major step in their romance.