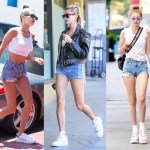 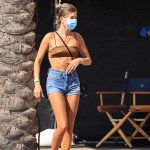 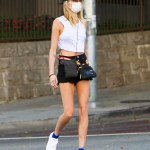 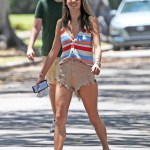 Hailey Baldwin dropped by the studio that her husband, Justin Bieber, was working at in a grunge-chic ensemble. The couple is in Los Angeles again, after traveling across America on a road trip.

Casual-cute was the theme of Hailey Baldwin’s outfit when she visited Justin Bieber at a studio in Los Angeles on Aug. 18. For the visit, the model rocked an outfit reminiscent of the grungy Tumblr era: an oversized flannel with a yellow tartan print, paired with denim cutoff shorts and black sneakers. She added more modern touches with a sleek bandeau crop top and a layering of gold necklaces! The focal piece of this ensemble, however, was the “Vicky Camera Bag” made of a quilted patent leather, that was originally listed for $1,850 on Saint Laurent’s website. The price has since been slashed to $1,289!

Even stylish supermodels have to get their temperatures checked. Hailey had to make sure she wasn’t running a high temperature — a symptom of COVID-19 — before she was granted access to the studio that Justin was working in. Justin revealed that he was already working on a “new album” and that is was “sounding crazy good” in an Instagram Story post in April of 2020. In July, Justin’s manager, Scooter Braun, even teased that a “new album” could be coming. “Justin is busy working on new music that he can’t wait to release,” a source close to Justin and Hailey also EXCLUSIVELY told HollywoodLife at the end of July.

Justin just released his new album, Changes, in February of 2020 but was forced to reschedule the cross-country stadium tour that would’ve promoted his new music. The tour will now kick off in June of 2021!

There was a blessing in disguise amid this change of plans, however. Justin was able to take a road trip with his wife, Hailey, across the United States! In addition to indulging in R&R time in Utah, the married couple of two years hanged out with Chance The Rapper in Chicago and Kanye West in Wyoming at the end of July. After dropping by to check in with Kanye, who had recently made headlines for claiming that his wife Kim Kardashian was trying to “lock” him up and bring a doctor to Wyoming, our aforementioned source EXCLUSIVELY told us that Justin and Hailey were “already back on the road.”

With the big bro @chancetherapper

Justin Bieber and Hailey Baldwin with Chance The Rapper amid their 2020 summer road trip. (Instagram/@justinbieber)

“They’ll be there for the next few weeks living on [Justin’s] tour bus driving and exploring all over the country,” the insider added at the time. Now that we’re midway into August, it looks like Justin and Hailey are back home in LA — at least, for now.