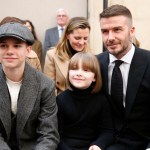 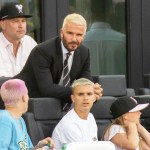 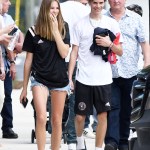 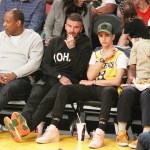 David Beckham’s 17-year-old son, Romeo, did everything he could to ‘keep up’ with his dad while running in the blazing heat! Check out the photo of the father and son and a clip of Romeo sprinting up a storm!

We had to do a double-take with this latest photo! David Beckham‘s 17-year-old son, Romeo Beckham, took to Instagram on August 13 and posted a picture and video featuring the father and son going for a run in the intense heat. The pic in the carousel post featured the former soccer star, 45, posing with his son, whom he shares with wife Victoria Beckham, 46.

Running in the heat @davidbeckham 🤮😍

The two athletes showed off their muscular frames and Romeo looked just as tall as his father! The pair even went for a father-son twinning look by going shirtless for the sprint session and wearing gym shorts with sneakers. As if it wasn’t hard enough to tell these two apart in the photo, the video that followed the image was even more difficult to decipher who it was, at first, that was running!

“Keep up,” David yelled back to Romeo as he went for a long sprint in the countryside. In the blink of an eye, Romeo darted right past David along the winding road, working some of those soccer skills he’s shown off in some of his TikTok videos. “Running in the heat,” Romeo captioned the photo and clip, adding his dad’s Instagram handle as well as vomiting and heart-eyes emojis. Honing in on his embarrassing-dad tendencies, David even commented on the post, saying, “I think I was quicker” with a laughing/crying emoji!

Oddly enough, this isn’t the first time that Romeo has looked almost identical to his famous father. In October 2019, Romeo was spotted rocking a very similar hairstyle to his dad from back in the day. The young model sported a braided hairstyle that harkened back to David’s own infamous 2003 ‘do. Romeo, however, gave the look a bit of an update, opting to shave the sides of his head and only work the braids on the crown of his noggin.

David and Victoria’s youngsters are seriously standing out from one another as they get older. The English power couple, who have been married for over 20 years, also share sons Brooklyn Beckham, 21, Cruz Beckham, 15, and their sweet daughter Harper Beckham, 9. The family recently celebrated a major milestone, as Brooklyn got engaged to his lady love, actress Nicola Peltz, 25! As the family gets wedding preparations underway, we cannot wait to see more of the whole Beckham family!