Brad Pitt has answered Angelina Jolie’s request for the judge overseeing their custody case to be removed. Here’s the latest involving their fiery divorce battle.

UPDATE 8/14/20 8:10pm EST: Angelina’s attorney Samantha Bley DeJean provided HollywoodLife with the following statement: “It is unfortunate that Mr. Pitt’s team has sought to intervene ahead of Judge Ouderkirk’s response. One can only conclude that this is an attempt to obstruct or influence Judge Ouderkirk’s answer. Any delay in these proceedings is due to their zealous attempt to create an unrecognized special exception for their client’s benefit.”

It only took a week for Brad Pitt to fire back at Angelina Jolie‘s request to have Judge John W. Ouderkirk “disqualified” from their divorce and custody case. The actress, 45, recently filed legal documents alleging that Ouderkirk had a previous relationship with Brad‘s attorney, Anne C. Kiley — subsequently delaying the legal process. In new court documents obtained by HollywoodLife, the actor, 56, fires back at his ex’s “Hail Mary filing,” claiming it will negatively effect their kids. 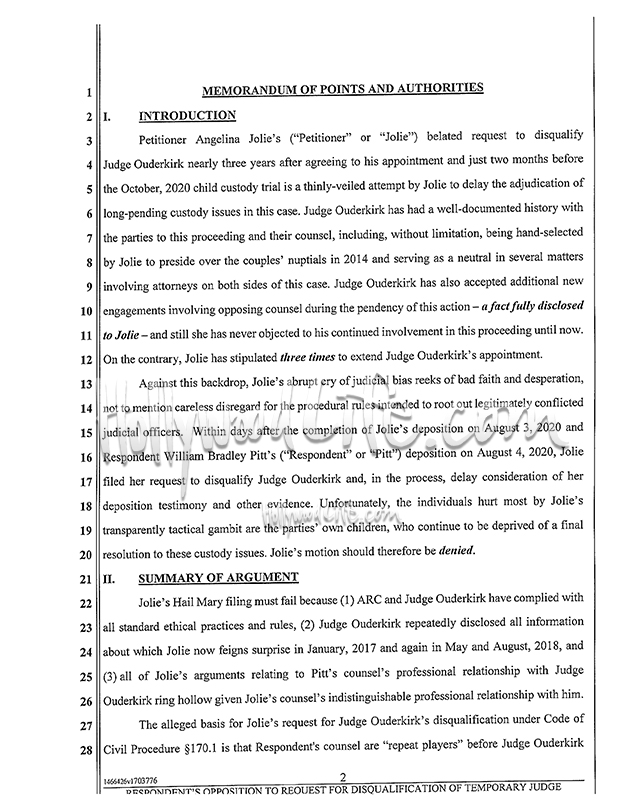 “Jolie’s abrupt cry of judicial bias reeks of bad faith and desperation, not to mention careless disregard for the procedural rules intended to root out legitimately conflicted judicial officers,” Brad’s attorneys state in the legal documents. “Unfortunately, the individuals hurt most by Jolie’s transparently tactical gambit are the parties’ own children, who continue to be deprived of a final resolution to these custody issues. Jolie’s motion should therefore be denied,” his attorneys claim. Brad and Angelina share six kids together: Maddox, 19, Pax, 16, Zahara, 15, Shiloh, 14, Vivienne, and Knox, both 12.“

Brad’s attorneys go on to call Angelina’s “belated” request a “thinly veiled attempt” at delaying “the adjudication of long-pending custody issues” in the case. The actor’s legal team claims Judge Ouderkirk “has had a well-documented history” with the former couple, noting that Angelina “hand-selected” the judge to preside over her August 2014 wedding to Brad. The legal documents also state that Angelina “never objected” to Ouderkirk’s “continued involvement” in the case until recently. (Angelina filed her documents requesting Ouderkirk’s removal on August 7.)

The court documents further explain, “It is disingenuous for Jolie to now take umbrage to Judge Ouderkirk’s participation in matters involving Respondent’s counsel when (1) — she has been well aware of this fact since January 2017 and (2) her own attorneys have likewise served as counsel in other matters before Judge Ouderkirk — both before and during the pendency of this case,” Brad’s legal team claims.  “However, for Jolie to now claim that such participation is disqualifying grounds for Judge Ouderkirk is simply preposterous.”

Brad’s court documents also state that the exes are due back in court in October for the start of their custody trial. HollywoodLife has reached out to representatives for both Brad and Angelina.

Brad’s filing is in response to Angelina’s August 7 request to have Ouderkirk — the private judge overseeing their divorce case — removed from the legal proceedings. HollywoodLife obtained Angelina’s court documents, in which she alleges Judge Ouderkirk had a previous relationship with Brad‘s attorney, Anne C. Kiley. The Maleficent actress filed the legal documents in Los Angeles Superior Court.

In Angelina’s court documents, she asks for Judge Ouderkirk to be removed from the case, claiming he “failed to disclose the cases that demonstrated the current, ongoing, repeat-customer relationship between the judge and Respondent’s counsel.” Angelina further claims that Brad’s attorney, Kiley “actively advocated for Judge Ouderkirk’s financial interests in moving — over the opposing party’s opposition — to have his appointment (and his ability to continue to receive fees) extended in a high profile case.”

Angelina’s attorney Samantha Bley DeJean provided HollywoodLife with the following statement on August 13: “As is set forth in the filing, all my client is asking for is a fair trial based on facts, with no special favors extended to either side. The only way litigants can trust the process is for everyone involved to ensure that there is transparency and impartiality,” DeJean concluded.

The Mr. & Mrs. Smith stars, who wed in 2014, were together for a total of 12 years (and married for two) before Angelina filed for divorce in the fall of 2016. Following their split, Brad was investigated for alleged child abuse, which he was later cleared of all allegations. While their court dealings were turbulent at first, as seen in public divorce/custody documents, the pair later filed to have them sealed to ensure privacy.