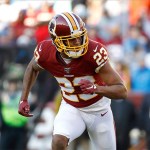 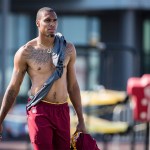 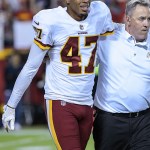 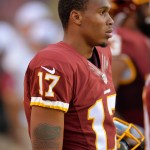 Three months after being arrested in connection with an armed robbery in Florida in May, Seattle Seahawk Quinton Dunbar no longer faces charges.

UPDATE 3, 8/7/20, 2:22pm ET: On Aug. 7, Broward State Attorney Mike Satz announced that his office has declined to file criminal charges against Quinton Dunbar in relation to this armed robbery case “due to insufficient evidence.”

UPDATE 5/14/20, 11pm ET: The Seattle Seahawks PR department tweeted out: “We are aware of the situation involving Quinton Dunbar and still gathering information. We will defer all further comment to league investigators and local authorities.”

NFL player Quinton Dunbar is in big trouble with the law. The 27-year-old cornerback has only been a Seattle Seahawk for six weeks following a March 24 trade from the Washington Redskins. Now he’s wanted in connection with an armed robbery in South Florida. Miramar, FL Police issued an arrest warrant for Quinton and New York Giants rookie Deandre Baker for an incident that allegedly went down at a house party on May 13.

1. Quinton played NCAA college football at the University of Florida. He spent five years in Gainesville, first arriving in 2010 with a scholarship under Coach Urban Meyer’s Gators squad. He ultimately red-shirted his freshman year after playing only one game. Quinton then played the next four years for Coach Will Muschamps after Meyer departed to Ohio State. Quinton played the position of wide receiver for the Gators, although he would not end up in that position upon joining the NFL.

2. Quinton played his first four seasons in the NFL with the Washington Redskins.  He came aboard the team in  May of 2015 as an undrafted free agent. He initially didn’t make the team’s final 2015 season cut, but was signed to the practice squad after showing promising talent in the cornerback position. Three weeks into the 2015 NFL season, Quinton was promoted to the active team roster. He played for the Redskins through the 2019 season.

3. Quinton was traded to the Seattle Seahawks in March 2020, and the team proudly showcased their newest member on May 14. In an odd coincidence, the Seahawks had Quinton do his first media day (remotely due to the coronavirus pandemic) with Seattle sports press just hours before news broke that he was a wanted man. The squad posted the 14 minute interview session to their Twitter account before his arrest warrant was issued. Sports reporters had given him a warm welcome to Emerald City during the Q&A.

4. Quinton was really looking forward to playing for the Seahawks, saying the team was a great “fit” for him.  During his May 14 media day, Quinton said that upon hearing he was heading from D.C. to Seattle, “I was excited. What a better fit, what a better culture. They’re a winning culture and have been winning for awhile.” He continued, “As far as the fit, I feel like their defense is who I am,” saying he’s their ideal cornerback because he “has the type of mentality to fit in.” Quinton said that he modeled his game after watching then-Seahawks star cornerback Richard Sherman, 32, play for the team in his seven successful years as a ‘hawk, which helped Quinton as he transitioned from wide receiver to cornerback after college.

(2/2) Firearm. Charges stem from an incident that occurred on May 13, 2020 in Miramar. A copy of the warrant and affidavit can be located at: https://t.co/uG5qWq97rX pic.twitter.com/fDm1YkOuTR

5. Quinton is a dad. He has a daughter Denim Skye Dunbar with a former girlfriend. She was born on the first day of the 2016 Redskins training camp. At the time, Quinton he posted an Instagram pic of his newborn with the caption, “As if I needed more fuel to fire this best day of my life the biggest blessing of my life July 28, 2016 Denim Skye Dunbar was born my beautiful daughter #WatchMeWork.”