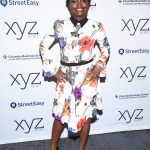 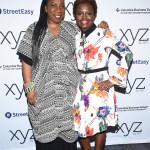 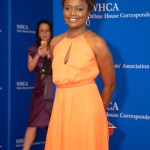 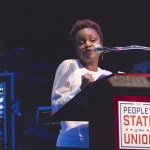 When political campaign organizer and TV commentator Karine Jean-Pierre was asked to join the Joe Biden team, she realized it was her duty to sign on for her daughter.

Karine Jean-Pierre, 42, is like a lot of our country’s moms wondering about how the pandemic crisis, the racism crisis and the coming environmental crisis will affect her young child. Except, she joined the campaign team for Joe Biden as a Senior Advisor, with the mission to successfully elect the former Vice-President, so he could implement solutions for all these crisis.

“I felt like this is my job as a mom to step in. I thought about my six year-old and I thought about what kind of planet or world or country are we going to be leaving to her and her peers”, she told HollywoodLife in an exclusive interview. As well as being a mom, Karine pointed out that “I’m a Black woman, I’m a gay woman and I’m an immigrant. And Donald Trump, he is someone who hates everything I am.”

While Biden had originally asked her to join his campaign when he set out on his journey to become the Democratic nominee for president, she turned him down, to focus on her family. But when it was clear that he would win the nomination, she decided that she had to join his team.

“I thought, I got to do everything I can, and if November came around and I didn’t, I knew I would regret not jumping in,” she said, explaining her reversal decision. “I also knew Joe Biden. I think that he is going to be the leader that we need in this moment. I know he’s going to bring change. He’s going to bring back decency to the office, and he’s going to move this country in a way that it needs to save our democracy.”

She was hired to be the president’s Northeast Regional Political Director and spent time traveling with then Vice President Biden to New Jersey, Pennsylvania, Maryland and other northeast states. “I got to brief him and got to know him really up close and see the type of decent, kind human being that he truly is and how much he cares about people and feels their pain.”

So why does Jean-Pierre believe that Biden has what it takes to be the president who can jump in on January 20, 2021 and immediately steer the country to a recovery from the coronavirus pandemic as well as to put in place policies to end systemic racism, and fight for equality and opportunity for women?

“More than 143,000 people have died in this country- mothers, fathers, cousins, nieces, grandparents- real people who have lost their lives in this pandemic and there are now more than four million cases of coronavirus. You have a president who has mismanaged this… he ignored it and didn’t prepare for it. He started talking about bringing the economy back and opening up, but has had no plan. He’s left it up to the governors and local leaders… we don’t have enough testing and enough PPE,” she says.

“But “, she says that in contrast, “you’ve seen Joe Biden stepping into that void, talking about how we need to have more testing and how he would activate the federal government. Activate it to make sure people of color, Native Americans and older citizens are taken care of better because they are the ones hardest hit. Make sure we are listening to the experts, that if we are going to open up we do it with a safe plan that is done by listening to the experts.”

Most of all, Karine insists that Joe Biden will take “responsibility” for finding solutions to the pandemic, something which the Vice President has repeated in his own campaign ads, including those he has filmed with Barack Obama. The author of the book, ‘ Moving Forward ‘, points to Biden’s willingness to accept responsibility versus Donald Trump “sticking his head in the sand” and saying “I didn’t do it, it’s not my fault.” “That’s not what a president does,” believes Jean-Pierre. And in fact, President Harry Truman famously displayed a sign on his desk saying: “The Buck Stops Here;” not “I’m Passing the Buck.”

When it comes to the Black Lives Matter movement, Biden has publicly supported it, meeting with protesters and saying in a speech in Philadelphia,, ‘ I won’t traffic in fear  and division. I won’t fan the flames of hate. I will seek to heal the racial wounds that have long plagued this country- not use them for political gain’. Trump, in contrast,  has called Black Lives Matter ‘a symbol of hate’ on twitter, after those words were painted on Fifth Avenue outside of Trump Tower.  Karine reminds voters that it was the sight of the White Supremacist marchers in Charlottesville, that ignited Joe Biden’s decision to run for president, and that was a huge relief to her.

“When you see the images of people marching down the streets of Charlottesville with tiki torches… that image to me and many older Black Americans that I’ve talked to, induced fear. And you have a president who says ‘very fine people on both sides’ and a young woman died because she was trying to fight against racism, that’s why Joe Biden jumped in. He thought out democracy is in trouble,” she says.

Karine says that Joe Biden has said that he’s committed to investing in communities of color, and ensuring that there is major investment in Black communities to make them thrive. In fact, if you go on Joe Biden’s website and into the Joe Biden vision center, there is a long and detailed plan for ‘Black America.’ The plan covers everything from ensuring that African American businesses get equal access to credit and capital, to giving Black-owned businesses a far bigger share of the Covid relief plans (PPP funds), to allowing tax credits to African Americans who want to buy their first homes, to providing relief to African Americans with student debt, to establishing tuition-free college for all students whose families earn less than $125,000, to reducing mass incarceration and to expanding the use of the U.S Justice Department to address systemic misconduct in police departments and prosecutors offices.

Biden has so many very specific and detailed plans addressing systemic racism in the criminal justice system, as well as for the economic and healthcare injustices that Black Americans face that neither Jean-Pierre nor I can detail them here. But, I suggest that you set aside at least half an hour just to read through the Biden Plan for Black America and likewise Joe Biden’s Agenda for Women, and his plan for combating coronavirus, plus his plans for healthcare and ending gun violence. In all, there are a total of forty-four very detailed plans for various issues facing Americans.

Jean-Pierre gets very animated discussing Biden’s plans for healthcare. “Healthcare’s a right. It shouldn’t depend on your race or gender or zip code. You know, the Trump administration has put countless women at risk of losing their access to affordable preventable care,” she says referring to the Trump administration’s ongoing battle to end the Affordable Care Act, it’s defunding of Planned Parenthood and it’s successful battle to have access to free birth control ended on many companies’ insurance plans.

Biden instead pledges to expand Obamacare, restore the funding of Planned Parenthood and to fight to repeal the Hyde Amendment, which barred federal funds from being used to pay for abortions. As well, Joe Biden wrote the Violence Against Women Act in 1990 to help protect women against domestic violence and sexual assault. He promises to fight to reauthorize and fund it again, since Senate Majority Leader Mitch McConnell has refused to allow that reauthorization for more than a year. As for Joe Biden’s commitment to choosing a woman as his vice president, Karine wants voters to remember that he was the “the only candidate in the primary that said his vice president is going to be a woman. He wanted to have a ticket that represented the country. He has also said that his Supreme Court justice pick will be a Black woman… representation matters,” she says.

When asked about whether Jean-Pierre thinks that Joe Biden should choose a woman of color as his vice president, she replies that “Joe Biden has been through the process (having been through being a vice president himself) and he knows what it looks like to have a number two… he wants someone who is powerful and with whom he is sympatico, as he was with President Obama.” She points out that Congresswoman Lisa Rochester from Delaware, who is an African American, is on the vice presidential pick committee. “He’ll make the right decision that works for this country”, she asserts confidently.

Perhaps the best news for some Americans is that Karine is sure that Joe Biden will not spend his days and nights rage tweeting. “He will respect and honor the office that he holds! We are a world leader, domestically and internationally. He will bring that back.”

Now, if you still need to register to vote, you can go to our HollywoodLife Register To Vote module below, and register right now. State deadlines are approaching. Karine says that to help the Biden campaign if you want, even if you just have  an hour, you can sign up at Joebiden.com to make phone calls and do text messages. And you can also talk to your friends and families about the importance of making their voices heard by voting!