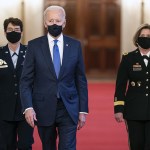 Barack Obama has officially endorsed Joe Biden for president, telling voters that  his two-time VP and his ‘close friend’ has ‘all the qualities’ the country needs in a president right now — not Donald Trump.

Former President Barack Obama is officially throwing his weight behind Joe Biden for president, ending months of speculation over when he would finally endorse his two-time vice president. Obama, 58, announced in a video message, posted to Twitter on April 14 that “I’m so proud to endorse Joe Biden for president. Choosing Joe to be my vice president was one of the best decisions I ever made, and he became a close friend. And I believe Joe has all the qualities we need in a president right now… “The other side has a massive war chest, the other side has a propaganda network with little regard for the truth,” Obama continued. “On the other hand, pandemics have a way of cutting through a lot of noise and spin to remind us of what is real and what is important. this crisis has reminded us that governments matter. Now is the time to fight for what we believe in.” You can watch President Obama’s full 12-minute message below.

Obama praised Biden for his accomplishments during his two terms in office, including his work in rebuilding the economy after the 2008 Great Recession, and his response to the 2009 H1N1 pandemic. But he also asked that Biden consider going further to the left on some of his policies, such as providing a public health option for all Americans and pushing for stronger climate change reform. He also praised the other Democratic nominees, including “American original,” Vermont Senator Bernie Sanders, who endorsed Biden on April 13. Obama implored Sanders’ powerful body of supporters to coalesce behind Biden now that he’s the presumptive nominee. “We both know that nothing is more powerful than millions of voices calling for change. And the ideas he’s championed, the energy and enthusiasm he inspired, especially in young people, will be critical in moving America in a direction of progress and hope,” he said.

The former president also called out President Donald Trump, particularly his lackluster response to the COVID-19 pandemic, which, at the time of his address, had claimed the lives of over 24,000 Americans. “This crisis has reminded us that government matters. It’s reminded us that good government matters. That facts and science matter. That the rule of law matters. That having leaders who are informed, and honest, and seek to bring people together rather than drive them apart — those kind of leaders matter.”

I’m proud to endorse my friend @JoeBiden for President of the United States. Let's go: https://t.co/maHVGRozkX

Obama is undoubtedly the most powerful ally Biden could have in the fight against President Trump. While it was presumed that Obama would eventually endorse Biden, the former president has kept a low profile throughout the majority of the 2020 race — at least publicly. Behind the scenes, Obama counseled candidates both before they announced their bids, and after they dropped out, he revealed in November 2019. That included Sanders, who dropped out of the race on April 8. Obama said from the beginning that he would get behind the presumptive nominee, who now happens to be one of his closest partners in the political arena.

In August 2019, The New York Times reported that Obama was skeptical at first about Biden running for president, but came around: “While initially skeptical of Mr. Biden’s decision to run, Mr. Obama, driven by affection and loyalty, has been more active in advising his campaign than previously known — going so far as to request a briefing from the campaign before his friend officially joined the fray, according to people close to both men.”

The Trump reelection campaign rejected that Obama would endorse Biden hours before he made his announcement. “Barack Obama spent much of the last five years urging Joe Biden not to run for president out of fear that he would embarrass himself,” Trump campaign manager Brad Parscale said in a statement. “Biden is a bad candidate who will embarrass himself and his party. President Trump will destroy him.”

If you haven’t registered to vote yet, there’s still time to do so before the general election on November 3, 2020. You can sign up here, on HollywoodLife by filling out the form below: