Kate Beckinsale got some major Instagram love from her man, Goody Grace, 23, as she celebrated her 47th birthday on July 26. The musician posted a video of the pair with the caption, “Happy Birthday @KateBeckinsale,” he captioned the clip. “I love you.”  On top of that, he also included a heart emoji AND the infinity symbol to show just how serious this relationship is really getting!

happy birthday @katebeckinsale i love you 🖤∞

It’s not one-sided, either! Kate posted a goofy video of herself and her cat to thank everyone for their birthday wishes, and Goody popped up in the comments section to write, “HAPPY BIRTHDAY I LOVE YOU.” In response, Kate reiterated the feelings by saying back, “I love you,” with a kissy-face emoji. 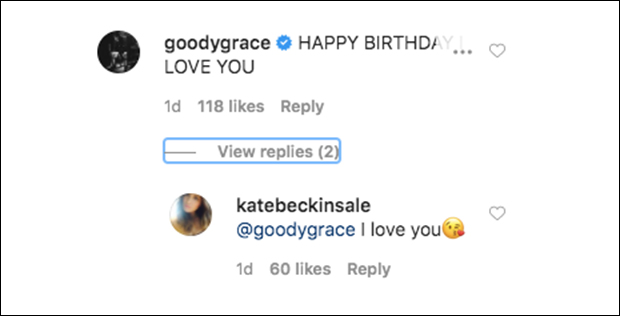 Kate and Goody were first linked back in April when they were photographed holding hands on a stroll together. Since then, they’ve seemingly been inseparable amidst the coronavirus quarantine. Photographers have caught them out shopping, arriving back at her home and more together. Now, they’ve even made their romance Instagram official with their loving comments!

While these two are obviously beyond happy together, their relationship has received some criticism due to their 24-year age difference. However, the actress has not been afraid to clap back at trolls who’ve commented on her love life. Plus, as HollywoodLife EXCLUSIVELY reported, she’s totally smitten with Goody!

“They actually have a lot in common,” a source told us. “Kate is a free spirit and she appreciates that Goody is talented. He’s really mature and they can have deep conversations but also can be playful and goofy at the same time.” In 2019, Kate was also briefly romantically linked to Pete Davidson, who is 21 years her junior.

Previously, she was in a long term relationship with Michael Sheen, 51, from 1995 until 2003. They had a daughter, Lily Sheen, in 1999 and remain close to this day. After her split from Michael, Kate began dating Len Wiseman, 47, in 2003. They were married the following year and together for 11 years before splitting in Nov. 2015. Their divorce was finalized in 2019.