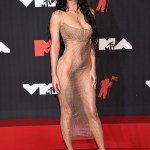 Megan Fox and Machine Gun Kelly took their romance public when they were spotted on an intimate date night!

Things are heating up in the summer time for Megan Fox and Machine Gun Kelly. The rumored couple enjoyed a fun night out at celebrity hotpsot Nobu in Los Angeles on Thursday, June 25, where they showed up dressed to impress. Megan, 34, put her amazing figure on display in a pair of skintight PVC pants which she paired with a revealing crop top and blazer. MGK, on the other hand, also got the leather pants memo which he sported with a bright red jacket and black undershirt. It must have been a fun evening for the two as they were seen holding hands on the way to his luxurious Aston Martin!

Megan and MGK have no doubt been one of the most talked about duos during the Coronavirus pandemic. They have kept fans guessing about the status of their relationship ever since mid-May when they were first seen hanging out together. Rumors only intensified days later when her husband Brian Austin Green, 46, confirmed their split after they were married for nearly 10 years.

Since then they have been seen getting super flirty with one another. MGK posted a couple of videos of them acting quite chummy on the set of his music video “Bloody Valentine” in late May. She was giggling with delight during a behind the scenes clip he posted of him appearing to flirt with her as she sat behind a bunch of big juicy donuts.

They took a unique step in their blossoming relationship recently where the two actually got matching manicures! The “Bad Things” rapper took to his Instagram story earlier this week where he revealed their nails that were painted white with red hearts, keys, and even a bloody knife.

donuts are hot. 🍩🔥 let’s get 10 million views on Bloody Valentine video before the weekend’s over 💝

One thing that won’t be happening anytime soon is Megan introducing MGK to her three kids Noah, 7, Bodhi, 6, and Journey, 3. “The thing about them both is that they are having fun with each other without the kids,” a source close to Megan tells HollywoodLife. “Kids are talked about, but [Megan and MGK’s] relationship is currently heavily all about themselves. They want to establish what they can become and, if it gets serious enough to get kids involved, then those roads will be tackled.”