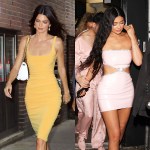 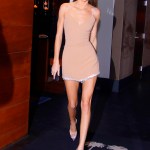 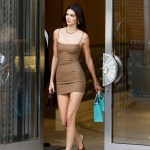 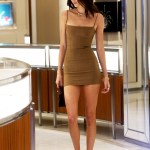 Kendall Jenner took to her Instagram story to share some eye-catching videos that helped her promote her Kylie Cosmetics collaboration with her sister Kylie Jenner by modeling a tight black bodysuit that showed off her amazing figure.

Kendall Jenner, 24, is looking better than ever this summer and she proved it with her latest Instagram story videos! The gorgeous model shared two videos that had at least one promoting her new Kylie Cosmetics collaboration, The Kendall Collection, with her younger sister Kylie Jenner, 22, and in them, she’s wearing a black long-sleeved shorts bodysuit that hugged her fit figure and flawless makeup that brought out her natural beauty.

In the first clip, Kendall is standing in front of a mirror while filming herself and running her hands through her long dark yet highlighted hair. She gives off a serious facial expression as slow music plays in the background. “been a minute,” she captioned the video and tagged makeup artist Mary Phillips and hair stylist Jen Atkin.

In the second video, which is in Boomerang style, Kylie joins Kendall while wearing a black crop top and matching drawstring shorts. The two sisters are sitting next to each other as Kendall pans the camera over the both of them with pursed lips. The younger Jenner has her hair up and parted in the middle as she looks over to the side during the clip. “our collection drops on friday,” Kendall’s caption read along with a smiley face.

Kendall and Kylie’s makeup collab will indeed come out on June 26 and it will include various makeup products such as an eye shadow palette and lip gloss. In addition to the stunning videos of herself, she shared some videos of the new collection’s boxed set as well as the individual product boxes that are covered in cute and sexy pics of the Jenner gals. Chrissy Teigen took to her own Instagram to show off a photo of the collection she received pre-release, which Kendall reposted, and wrote, “MAMA GONNA DO HER FACE TODAY!” in the caption.

Kylie is known for either collaborating with or naming her Kylie Cosmetics collections after her family members. In addition to Kendall, she’s released products with older sister Khloe Kardashian, 35, and named one collection after her two-year-old daughter Stormi.