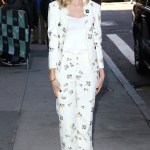 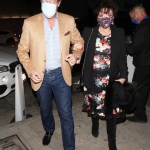 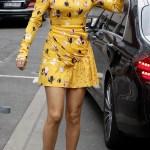 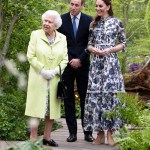 Sofia Vergara shared a behind-the-scenes snap of herself in a stunning designer dress — and she is seriously our summer style goals! The 47-year-old took to Instagram on June 19, offering fans a sneak preview of her upcoming Spring campaign for Dolce & Gabbana. In the pic, she posed on a scenic lookout at what appeared to be the Italian coast, wearing the gorgeous floral dress. The frock, which retails for a cool $2475, featured pink, green and purple accents, and a sweetheart neckline.

The America’s Got Talent judge paired the ‘fit with platform heels featuring a pink, green and yellow design. The towering pumps accentuated Sofia’s toned legs as she sat on the ledge and hugged a green handbag close to her chest. The actress’ long hair was styled in pretty waves, which fell effortlessly down her back.

How I feel about Friday’s 🥰💞 #BTS #Dolce

Just days earlier, Sofia was so touched by a performance during the June 16 episode of AGT that she cried. Singer Nolan Neal took the stage and opened up about the struggles he faced in his past. His dad committed suicide when he was in his 20s, and Nolan later developed problems with addiction. Nolan would lose his record deal due to his struggles, and his loved ones eventually had to step in to help him. Nolan performed an original song titled “Lost” for his AGT audition. This was the first song that he wrote sober

Sofia, Simon Cowell, Heidi Klum, and Howie Mandel gave Nolan a standing ovation, along with the entire audience. When it was Sofia’s turn to speak, she had tears in her eyes. “It was really touching for me, your song,” she told Nolan as her voice cracked with emotion. “I know very well the sickness of addiction. My family is completely full of this horrific sickness, and I totally understand.” The June 16 episode was quite the emotional roller coaster for Sofia. She helped one of the contestants with his sword-swallowing act, and totally freaked out, even running off the stage at one point!