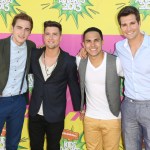 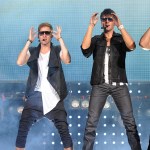 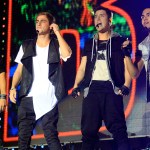 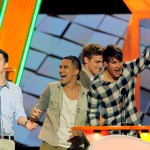 Fans are freaking out — big time — after seeing Big Time Rush get back together to sing one of their biggest hits. Watch them slay ‘Worldwide’ from their virtual reunion!

Be still, our teenage hearts. Coming at you from all corners of the United States, it’s Big Time Rush! The former boy band reunited virtually for an uplifting performance of their hit “Worldwide,” and it left fans positively swooning. All four of the guys, who starred on the popular Nickelodeon musical comedy series, Big Time Rush from 2009 to 2013, were present to sing their parts of the song.

Kendall Schmidt, 29, performed at home in Venice Beach, California while casually showing off all of his band memorabilia. Logan Henderson, 30, joined his guys straight from his couch in Las Vegas, Nevada. James Maslow, 30, appeared to have his own makeshift recording studio set up in Sherman Oaks, California. And lucky duck Carlos PenaVega, 30, was crooning straight from Maui. And they all sounded just as perfect as they did the first time we all heard “Worldwide” years ago.

Their fans were obviously freaking out after seeing the new video. “totally not crying,” one fan tweeted, absolutely lying. “The way I’m still in love with James’ voice omgg,” wrote another. “IM CRYING RN OMG.” Actually, most of the tweets in response to the video were girls announcing that they were crying after watching the video. No shame in that! This is the second time that the Big Time Rush guys have graced us with a mini reunion during the COVID-19 crisis. Thoughtful of them, right?

They recorded a virtual message to fans in April, telling them that, “we wanted to say hi, wish you all well, [and] hope you’re all staying healthy during this crazy time. It’s a great time to stay connected, like we are, and it’s a great time to reach out to friends and family. You guys, please stay home, stay safe, and remember to practice a little more love and compassion right now.” Aww!