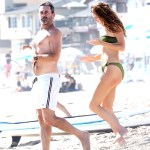 Rob Lowe has never looked better! The ‘Parks and Rec’ star took a break from quarantining amid easing restrictions, and hit the waves with his handsome son.

Rob Lowe is loving the California sunshine! The 56-year-old hit the waves in Santa Barbara on June 13 for a father-and-son boogie boarding sesh amid easing lockdown restrictions in the state. The actor went shirtless for the family outing with his lookalike son Matthew, 27, and attempted both body surfing and boogie boarding. His wife Sheryl Berkoff, 58, also came along to the beach, but stayed on dry land with the family’s two adorable dogs. Rob showed off his salt and pepper hair, and his arm tattoo, as he waded through the water in nothing but navy blue swimming trunks, while carrying a blue boogie board.

It seems Rob is making the most of the recently lifted COVID-19 restrictions, as beaches are beginning to reopen. Earlier in the quarantine period, he revealed he was set to reprise his role on the beloved show Parks And Rec for a reunion episode, and fans noticed something different about the actor. As hair salons were closed, Rob is embraced his roots (literally), showing off the grey hair around the sides of his head.

Although fans were understandably excited about the announcement that Parks And Rec would return for a special episode, in aid of the COVID-19 crises, many wanted to talk about the West Wing star’s salt and pepper hair, as he transforms into a silver fox. “The only person that can look even better during a pandemic and shelter at home order. Damn,” one fan commented, while another wrote, “I’m liking the gray hair! Makes your eyes pop.”

Rob’s April 23 clip showed him talking to the camera, and offering several details about the upcoming episode, in which he’ll reprise his character Chris Traeger. “Yes, it is literally true. The Parks And Rec gang is back next Thursday,” he said. “We shot a brand new episode totally in secret on our iPhones. It was literally pretty hard, pretty hard to do.” Rob then added, “The whole gang’s back.” His co-star Adam Scott also commented on the clip, “You look f*****g incredible,” he wrote. We couldn’t agree more!