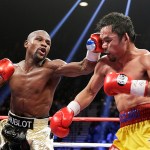 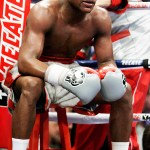 Floyd Mayweather is having a good laugh at Conor McGregor’s latest UFC retirement announcement. He says if Conor wants to return to fighting, he’ll be waiting to ‘punish’ him again in the boxing ring.

After former UFC  lightweight and featherweight champ Conor McGregor announced on June 6 that for the third time in four years he was yet again retiring from fighting, his boxing nemesis Floyd Mayweather Jr. couldn’t resist an online jab. The day after he dropped the news, Conor shared an Instagram photo of a large brownie desert with “Happy Retirement Daddy” written in white icing. Floyd trolled the 31-year-old Irish born father of two in the comments for not sticking around as a pro-athlete long enough to take him up on a rematch in the boxing ring.

“If I’m not mistaken, didn’t you tell Mike Tyson you could beat me if we fought a second time? Now you’re quitting! I thought you wanted to beat the best? Well, if you decide to come back, I will be waiting to punish you again.” Floyd wrote, with the comment gathering over 40,000 likes from fans in just 24 hours.

Money — who is 50-0 as a pro boxer —  came out of retirement to beat Conor in an massively hyped Aug. 2017 boxing match. The 43-year-old walked away with an estimated $275 million, while Conor took home approx. $130 million, in one of professional sports’ most lucrative bouts ever. The Irishman even seemed to hint in a May 18, 2020 tweet that he was still up for a rematch with Floyd after re-watching their 10 round fight, where Conor lost due to a technical knock-out.

“It was a great contest, just watched it back! Early rounds all mine, and even later rounds when legs where gone, I still out-landed him. I received my credit from many notable names in the boxing world, which I was thankful for. None more so than from Mike (Tyson). Excited for part 2,” Conor tweeted, while name dropping former boxing heavyweight legend Iron Mike’s name.

On June 6 during UFC 250, Conor took to Twitter and wrote, “Hey guys I’ve decided to retire from fighting. Thank you all for the amazing memories! What a ride it’s been! Here is a picture of myself and my mother in Las Vegas post one of my World title wins! Pick the home of your dreams Mags I love you! Whatever you desire it’s yours.”

Conor had previously announced he was retiring from MMA fighting in 2016 and 2019, only to return to the Octagon. His last appearance for the UFC was in Jan. 2020 where he took just 40 seconds to beat longtime American fighter, 37-year-old Donald “Cowboy” Cerrone during Las Vegas’ UFC 246. But he’s interested in bigger-name opponents than Cowboy, so there’s always a chance Conor could come out of retirement again for the right fight.

Following his latest retirement announcement, Conor told ESPN he was “bored of the game.” He explained, “The game just does not excite me, and that’s that. All this waiting around. There’s nothing happening. I’m going through opponent options, and there’s nothing really there at the minute. There’s nothing that’s exciting me.”