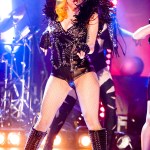 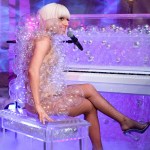 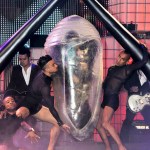 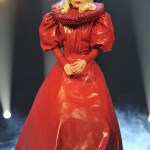 In a re-recorded speech following the death of George Floyd, Lady Gaga reminded graduates that they are watching a ‘pivotal moment’ in America’s evolution.

Lady Gaga, 34, just slayed this commencement speech. The star appeared on the YouTube special Dear Class Of 2020 where she candidly spoke about her thoughts on the systemic racism and oppression that have plagued America for generations. “You are watching what is a pivotal moment in this country’s evolution. You’re watching society change in a deeply important way,” Gaga, in a ’50s inspired motorcycle ensemble. “This change will be slow and we will have to be patient. But change will happen and it will have to be for the better,” she continued from a podium in her home.

“When I looked passed the rage that I feel about the systemic oppression and physical and emotional violence that has tortured the Black community endlessly, my mind turned to nature,” she continued, going on to poignantly compare nature to what America is currently experiencing, and suggesting that systemic racism and oppression are like planted seeds that have grown to become living leaves and branches. “This forest is who we are and where we live…I make this analog between racism and nature in this country because it’s as pervasive and as real as nature,” she explained, building on a message she shared to Instagram earlier this week.

“All of us are being challenged to change this system and think about how to effect real change,” Gaga added, pointing to what she thinks are the three things that will invoke change: time, sufficient effort and divine grade. “As a country, as a forest of seeds that have been mutated, nurtured with new, genius ways of watering…We can choose to place in each other, to prosper lovingly and effectively. The opportunity to reflect on this powerful moment,” she urged.

“Right now, more than usual — we’re trying to talk to each other. If we don’t listen, we don’t learn. Congratulations to the class of 2020, I can’t wait to see your forest,” she concluded her powerful message.

Gaga — born Stefani Germanotta — has been actively voicing her opinion in recent weeks about President Donald Trump. Following the death of George Floyd, the New York born artist wrote, “The voices of the Black community have been silenced for too long and that silence has proven deadly time and time again.” She went on, “And no matter what they do to protest, they are still met with no compassion by the leaders that are meant to protect them. Everyday people in America are racist, that’s a fact.”

In the next slide, she criticized Trump’s reaction to the death of George, who was an unarmed Black man. “We have known for a long time that President Trump has failed…He holds the most powerful office in the world, yet offers nothing but ignorance and prejudice while Black lives continue to be taken,” she wrote in her powerful statement.

“We have known he is a fool, and a racist, since he took office he is fueling a system that is already rooted in racism, and racist activity, and we can all see what is happening. It’s time for a change,” she urged.

The “Poker Face” singer has had a particularly busy week with the release of her new album Chromatica on May 29. The 16-track project was originally scheduled to drop on April 10, but was pushed back to due to the outbreak of COVID-19. “‘My biggest enemy is me, pop a 911.’ #Chromatica,” she wrote on Instagram. “the worst things I hear about myself come from me. #911,” she aded.

Just days after the release, the star was spotted out-and-about with her boyfriend Michael Polansky! The pair both sported protective face masks as they held hands getting coffee on May 30. Gaga looked fitter than ever in a black sports bra and fitted leggings, while her man kept things casual in shorts, a t-shirt and orange sneakers.