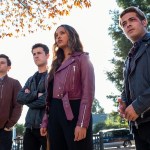 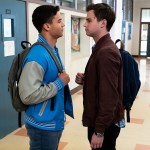 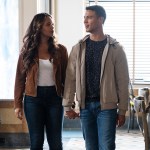 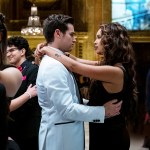 The final season of ’13 Reasons Why’ featured a number of familiar faces, and the final episode included a poignant Hannah and Clay moment that echoed a memorable season 1 scene. SPOILERS AHEAD!

Hannah Baker made a return (of sorts) in the 13 Reasons Why series finale. As Clay spoke with Ghost Justin after graduation, they talked about loving the people that have hurt them the most. Ghost Justin, who died earlier in the episode after succumbing to complications from AIDS, opened up about his complex relationship with Bryce and why they’re still friends in the after-life, despite all that happened. “We loved each other, me and him,” Ghost Justin said. “We were brothers. You know you can love people who did bad sh*t. You can forgive people. Even the people who hurt you worst.”

Clay replied, “You’re talking about Hannah.” As Clay said this, he looked across the gym to see Hannah sitting there in the same purple dress she wore to the school dance in season 1. “When you forgive someone, it’s more for you than them,” Justin continued. Clay said, “How much I hurt with Hannah, always, it’s my fault. I fall in love with girls too fast, too hard.”

Clay got up at the same time as Hannah and prepared to walk to the middle of the gym, where they connected and shared a dance in season 1. This series finale scene is a touching callback to one of Hannah and Clay’s defining moments. In season 1, Clay remembered the winter dance while talking with Tony on the bleachers. Clay was trying to figure out the slow song that was played at the dance. “It was the most amazing song,” Clay said. In that scene, Clay looked across the gym and saw Hannah — just like he does in the series finale.

The song that played at the winter dance was Lord Huron’s “The Night We Met.” That song has become Hannah and Clay’s song. “The Night We Met” is about heartbreak and echoed Clay’s journey at the time. For so long, Clay was unable to move on from Hannah. He wanted to go back to the time when she was alive, when things weren’t so hard.

In the present day, as Clay recalled that memory and headed toward the middle of the gym, the song didn’t play again. By the series finale, Clay was finally ready to move forward from Hannah and everything that happened in the past. The song was no longer needed. Clay was interrupted by a girl named Heidi, who told him that she also got into Brown University and wanted to get together to talk about their upcoming freshman year. Clay happily said yes and gave her his email.

Hannah Baker will always be a part of Clay’s life. The past will never be forgotten, but it’s time for Clay to move forward and start the next chapter of his life. That’s what Hannah would want for him. The final season of 13 Reasons Why is now streaming on Netflix.