Selena Gomez is participating in “Blackout Tuesday,” as seen in a statement on her official website. On June 2, fans were greeted with a message by the “Boyfriend” singer, 27, that encouraged “introspective thinking” amid protests calling for justice in the death of George Floyd, 46. Floyd, an unarmed Black man, died after being restrained by former disgraced police officer Derek Chauvin during an arrest in Minneapolis on May 25.

“It’s my hope today you are taking the time to do some introspective thinking about how we can all come together and listen to one another with an open heart and mind,” the statement read. “The country is long overdue for meaningful changes to our broken society. Black lives matter.” Below the statement included social media handles to the following organizations, “@blklivesmatter,” “@whenweallvote,” “@colorofchange,” and @naacp”. 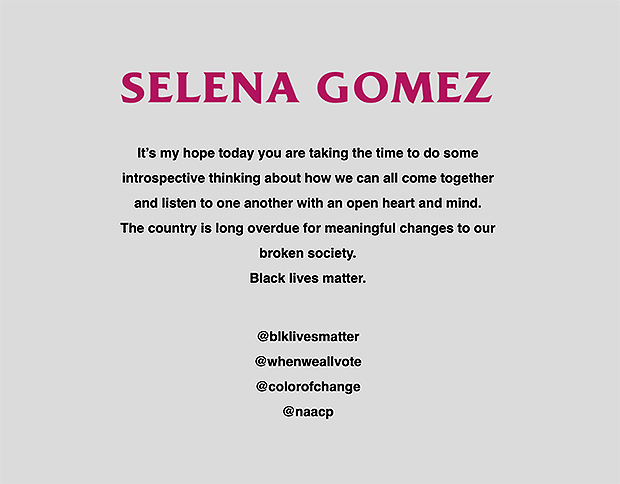 Selena took to Instagram on May 31 to express her thoughts about racism and recent events concerning police brutality. “I have spent the last 24 hours just trying to process this all,” she captioned a photo of a banner that read: “Black Lives Matter.”

The actress continued, “Nothing anyone says can take back what has happened. But we can and must all make sure to take action. Too many black lives have been taken from us for far too long. They deserve better. They deserve to be heard. We all need to do better and not sit in silence as this injustice continues.”

Selena’s new Rare Beauty company joined “Blackout Tuesday,” with its own statement. “To our community, we are going dark tomorrow to take part in #BlackoutTuesday,” said Rare Beauty in a post on Instagram, alongside a plain black image. “It’s our hope that we can all take time to do some introspective thinking about how we can all come together and listen to one another with an open heart and mind. We’re also thinking through how we can take action against systemic racism and make change. The country is long overdue for meaningful changes to our broken society. Black lives matter,” the caption concluded with the hashtag, “#theshowmustbepaused.”

“Blackout Tuesday,” also known as #TheShowMustBePaused, was created by Atlantic Records executive Jamila Thomas and Platoon’s Brianna Agyemang. The initiative calls for a social media blackout in response to “the murders of George Floyd, Breonna Taylor, Ahmaud Arbery, and countless other Black citizens at the hand of the police,” according to the organizer’s Instagram page.

“Tuesday, June 2nd is meant to intentionally disrupt the work week,” the pair said, according to our sister site, Variety. “The music industry is a multi-billion dollar industry. An industry that has profited predominantly from Black art. Our mission is to hold the industry at large, including major corporations + their partners who benefit from the efforts, struggles and successes of Black people accountable… This is not just a 24-hour initiative. We are and will be in this fight for the long haul.”