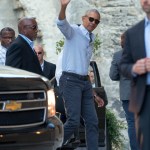 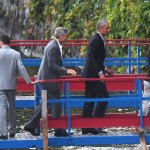 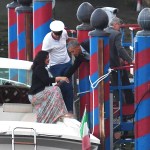 Amid the protests over George Floyd’s death, celebs like Barack Obama, Missy Elliott, and more encouraged voters to make their ‘voices’ matter by casting their votes in the June 2 primaries.

Amid the pandemic and protests, several states — Indiana, Iowa, Maryland, Montana, New Mexico, Rhode Island, South Dakota, Pennsylvania, and Washington, D.C. – are holding primaries on June 2. Though everyone’s attention is on protesting the death of George Floyd, Breonna Taylor and Ahmaud Arbery, some celebs made sure to remind voters that they need to show up at the polling place as well as in the streets. “I have to remind y’all to VOTE today!” tweeted Kandi Burruss, listing off the states engaging in today’s primaries. “Please go vote! If I’m missing a state that also has a voting day today, please comment below.” Missy Elliott, Kevin Hart, and Fat Joe also posted images reminding their followers to vote.

Former President Barack Obama also (indirectly) encouraged protesters to vote. In the late hours of June 1, Barack shared a video of George Floyd’s brother, Terrence Floyd, giving a speech at the site of George’s death. Barack quoted a line from the speech, writing, “Let’s do this another. Let’s stop thinking our voice don’t matter and vote. Not just for the president…educate yourself and know who you’re voting for. And that’s how we’re going to hit ’em.”

"Let’s do this another way. Let's stop thinking our voice don’t matter and vote. Not just for the president…educate yourself and know who you’re voting for. And that’s how we're going to hit 'em." https://t.co/WX6oLNRtI2

This miniature “Super Tuesday” is because several states had delayed or made changes to their primary plans due to the COVID-19 pandemic (which is still going on right now, in case you’ve forgotten.) Almost all the states involved have seen a huge increase in absentee ballot requests, according to USA Today. Plus, several states, plus D.C., changed the rules of their elections to accommodate social distancing guidelines, while also promoting mail-in voting. Pennsylvania Governor Tom Wolf has extended the deadline for voting by mail by one week, giving voters in the state until June 9 to mail in their ballot.

These primaries are not just for the upcoming presidential election. Yes, Joe Biden remains the presumptive nominee after Bernie Sanders dropped out of the race in April. However, in some states, Bernie’s name will still appear on the ballot. The Vermont senator made a deal that Sanders-won delegates will shift to Biden, their delegate slots filled by Sanders supporters. It’s a way to ensure that Bernie’s stances on the issues are part of the Democratic presidential platform this fall.

I have to remind y’all to VOTE today! DC, Indiana, Iowa, Maryland, Montana, New Mexico, Pennsylvania, Rhode Island, & South Dakota today is voting day for you. Please go vote! If I’m missing a state that also has a… https://t.co/KnNIqAJgv4

VOTE. Ya ain’t got shit else to do man! Get yo ass off the couch and go vote!!! I don’t wanna hear another excuse!! Stop believing that your vote and voice don’t matter! This the illest way to protest…vote for the change you want!!!

Donald Trump already clinched the Republican nomination. However, one of his supporters is “on the ropes” today, according to NPR. Rep. Steve King of Iowa, who has made numerous racist and pro-white nationalist remarks in the past, has been abandoned by the Republican establishment. Because King’s been stripped of all his committee assignments – because of his racism – his primary challengers have painted him as another “ineffective” politician. This might be the Iowa GOP’s best chance at ousting King.

The Change starts with our VOTE!!!!

On the other side of the aisle, Democratic Rep. Steny Hoyer faces a challenge from progressive McKayla Wilkes. The 29-year-old single mother was inspired by Rep. Alexandria Ocasio-Cortez’s victory. However, the Dem establishment has backed Hoyer, including the Congressional Black Caucus. He also outspent Wilkes, $2.7 million to $237,000, but if the voters in Maryland’s 5th Congressional District are tired of the “establishment,” he might have spent nearly $3 million on a losing campaign.

If you haven’t already registered to vote for this primary (or for the upcoming presidential elections) you can do so below. Remember, in these troubling times, it’s as important to show your political power.