George Floyd‘s family walked arm in arm with protesters in Houston, TX near Discovery Green park on June 2, eight days after George’s tragic death at the hand of law enforcement. Protestors who had spent the days since taking part in demonstrations against police brutality and racial injustice stood by the grieving family as they mourned George’s loss and marched on in solidarity. Images of the emotional moments were captured, which you can see below. 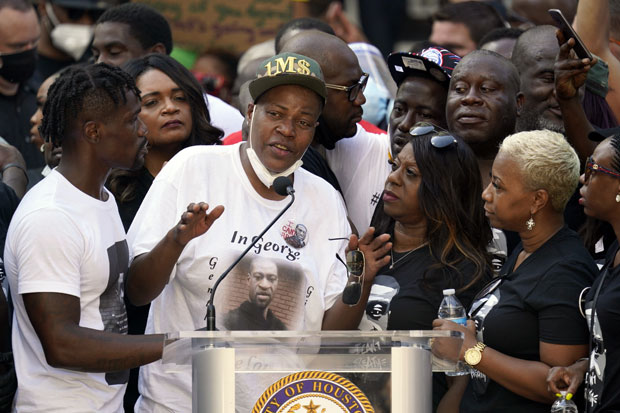 “Never, never man I would thought it would have this many people man for my brother,” George’s brother, Philonise, told protestors gathered in their hometown. “I don’t want nobody to be protesting violently…You’re saying it in all our names not just his name. It’s bigger than my brother.”

“We got kids growing up,” George’s brother continued, also referring to the fact that George left behind his six-year-old daughter, Gianna. “Sooner or later they’re gonna be trying to figure it out and they’re gonna say, ‘Man, we’re next.’ We’re trying to break the cycle right now. We got this. Man, I thank y’all for your kind words and support…I love y’all…I wouldn’t be here if it weren’t for y’all. I’d be in a shack, that’s tied up, sitting down. I’m hurt. I love my brother.” More of George’s family members, like his brother Terrence Floyd, shared inspirational words at the protest (see the clip below).

Prior to the march, a supporter of the Floyd family took to Instagram on May 31 to share with the Houston community that the march would take place on June 2 at 3 pm and start at the picturesque Discovery Green Park. “Im Inviting The Whole City To Be Part, All People All Races, All Humanity… We Will Do It Right For The Homie…. 3pm we will meet at Discovery Green, Please Send To Everyone,” they shared on Instagram, adding the hashtag “George Floyd.”

The March comes over a week after George lost his life at the hands of police officers in Minneapolis, MN. George, a Houston native, was unarmed and pinned down by former Office Derek Chauvin during an attempted arrest. George struggled the entire time Derek’s knee pressed into his neck, uttering the words, “please, please I can’t breathe” and “my stomach hurts…my neck hurts.” George eventually went unconscious and was taken on a stretcher to Hennepin County Medical Center, where he was pronounced dead at 9:25 pm.

Terrence Floyd, George Floyd’s brother, spoke at the scene of his brother's death in Minneapolis.

On May 29, Derek Chauvin was arrested and charged with third degree murder and manslaughter. Three days later, on June 1, an independent autopsy revealed that George had died as a result of “asphyxiation from sustained pressure.” Ben Crump, the Floyd family’s attorney, shared the news on social media, describing how George was “dead on the scene” and that the “ambulance was his hearse.”

In the wake of George’s death citizens and public figures alike have used their platforms to call out racial injustice and protest police brutality. Stars like Gigi Hadid, LeBron James, and Beyonce took to social media to voice their anger, dismay and frustration and more celebs like Ariana Grande, Halsey, and Cole Sprouse joined protests in California. Although the protests have been otherwise peaceful, the presence of police has turned circumstances violent.

Across the country, citizens have shared accounts of excessive force from law enforcement, including the use of tear gas and rubber bullets. Even journalists have been the target of intense action by the police, with some, like CNN‘s Omar Jiminez and his crew, being arrested on camera. As protests continue, HollywoodLife is encouraging our readership to educate, donate, and be a part of the solution by checking out these resources.