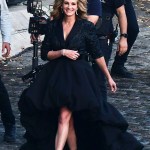 Julia Roberts made a political statement when she stepped out in Los Angeles with a face mask, featuring Barack Obama’s face.

Julia Roberts wins the award for most creative face mask — that also carries a strong message! The 52-year-old was spotted in Malibu on May 28 wearing a face mask that was emblazoned with a picture of former US President Barack Obama. The Academy Award winner was shopping at the Malibu Country Mart when she donned the unique protective gear, making a very clear political statement. She also wore a denim jacket with black sweatpants and grey boots. She tied her hair back into a messy top knot for the outing, amid California’s easing of lockdown restrictions.

The Pretty Women actress actually has ties to the 44th president and his family. She visited a high school in the Long An province of Vietnam in December 2019 with former first lady Michelle Obama, and also appeared together at an event in Malaysian. Both Julia and Michelle seemingly share similar values, as the event focused on enhancing education for women in the local area.

Julia’s shopping outing came just a couple of weeks after she sat down to pay tribute to Garry and the impact he had on her life during The Happy Days of Garry Marshall special. “After Pretty Woman, Garry gave me a necklace and he gave me a great card that he wrote for me, and the necklace had a diamond heart on it. And it’s so that I would always remember that wherever I was that there was someone that loved me and was on my side,” the 52-year-old said with tears in her eyes, adding, “Alright, let’s move onto the funny stuff with Garry.” Garry, Julia, and Richard all made a pact to work together again, and they reunited 10 years later for Runaway Bride.

Garry passed away on July 19, 2016. In his final days, so many people he worked with over the years came to say their final goodbyes to the man who had such a profound on them. Julia went to see Garry and opened up about her last moments with Garry. “Even in the saddest moments when you feel like you’re going to lose a friend, there’s too much to be happy about to ever be too sad,” Julia said. “I was there, and I just felt really honored that I got to spend some time with him.”