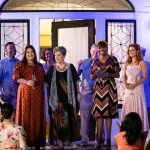 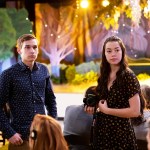 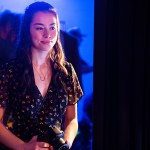 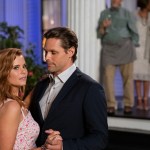 Netflix’s newest hit series ‘Sweet Magnolias’ ended its first season with a shocking cliffhanger. HL spoke with Carson Rowland about Tyler’s fate, Tyler’s relationship with his dad, and his hopes for season 2.

Sweet Magnolias debuted May 19 on Netflix and is already beloved by so many fans. The show is based on the popular series of books by Sherryl Woods. The first season focused on lifelong best friends Maddie (Joanna Garcia Swisher), Helen (Heather Headley), and Dana Sue (Brooke Elliott) as they juggle relationships, family, and careers in the small town of Serenity, South Carolina. Maddie’s marriage to Bill (Chris Klein) fell apart after Bill cheated on her with Noreen (Jamie Lynn Spears), who is now pregnant. This scandal rocked the entire Townsend family, especially Maddie and Bill’s eldest child, Tyler.

HollywoodLife spoke EXCLUSIVELY with Carson Rowland about Tyler’s evolution over the course of the season. While it will take time, Carson admitted that he believes Ty will eventually forgive his dad. He also weighed in on the possibility of a romance between Tyler and Annie (Anneliese Judge) in the future. Plus, we get his thoughts on that shocking season finale. Even Tyler doesn’t know who is in the passenger seat! Read our full Q&A below.

What was your reaction when you read that script and saw where those final minutes were going to go?
Carson Rowland: We didn’t get the final scripts for episodes 9 and 10 until about three-quarters of the way through filming. We saw this ending, and the first thing all the kids did was ask the writer, Sherryl Woods, “Okay, who is in the passenger seat?” We know Kyle is kind of knocked out, but who is the other character? Is it Annie, Ty, is it possibly Jackson? She would not tell us, and we bugged her so much all the time. It kind of became a joke on set. We would ask her, and she just refused to tell us. The cliffhanger was such an awesome way to end the season. My reaction when it first happened… I think it’s me. But obviously, Anneliese thinks it’s her. We have no idea, and I guess we’ll just have to wait and pray for season 2.

I was thinking that Tyler could be a red herring, but I honestly have no idea. Even now Sherryl still won’t tell you who it is?
Carson Rowland: She will not budge. Her mindset for the show is incredible. She’s holding steadfast. She will not budge on not giving away any spoilers.

Whether or not Ty is in the passenger seat, how do you think this accident will impact his relationship with Kyle going forward? Especially since it happened right after their fight.
Carson Rowland: I think what you’ve seen through the whole season is that the number one thing for Ty in his life is family. I think that’s even above baseball. Because his family effects baseball, so I think his relationship with his brother, his relationship with his sister, and his mom is just first and foremost in his life. He has gotten into arguments with his brother in the past with that rumor about him doing ballet and liking High School Musical, but I think that’s just what happens. I have an older brother, and we used to beat each other up all the time. But in the end, we’re still brothers. I think for Ty, it’ll affect him regardless of whether or not he’s in the passenger seat. Family is so important to him. It’s such a huge theme throughout this whole show. You need family, you need community, you need friends to survive. Although there are hiccups along the way, you still need it. It’s still the backbone that kind of helps you through life altercations.

A lot of Ty’s emotional turmoil stems from his family splitting up, and his dad cheating on his mom. Do you think Ty will ever get to a point where he can fully forgive his dad?
Carson Rowland: I do. Family is everything. Children view their parents as perfect, but there comes a time when you realize your parents are humans, too. It’s like a freight train. One day he has the perfect dad teaching him baseball and throwing catch, and now it’s like this guy who just broke up his family. It’s hitting Ty so hard. I think Bill’s really trying to do his best throughout all this. You see throughout the series that he’s really trying hard. He’s made mistakes, but he’s still making an effort, although he’s going about it in the worst possible way. I think Ty will see that in the future. It might take a while. It might take years. It might take five, but I think eventually he’ll come around. I don’t think the relationship will ever be the same because people change after traumatic events like that, but I do think they will eventually make up.

Do you think you Ty will ever come around to Noreen?
Carson Rowland: I’m not sure. It depends on how involved Noreen will be in our future. However, I can’t imagine when Noreen has a kid and Tyler has a step-brother or step-sister that he won’t be involved in that child’s life.

Ty’s mom is also in another relationship now — with Ty’s coach. How do you think Ty really feels about that?
Carson Rowland: For Ty, it just seems like one thing after another. First, your dad cheated on your mom and got a girl who is closer to your age pregnant. Now your parents are getting a divorce. He thought that he at least had baseball, but now his mom is dating his coach. It feels like the kid can’t catch a break. It’s such a frustrating experience, especially someone who is 16. I know I really tried to bring justice to that aspect of his life. There’s also a really beautiful scene in episode 6 where he has that conversation and Coach Cal says, “Look, I had a dad, too, and I have regrets.” I think at that moment Ty realizes that Coach Cal is using his best intentions.

On another note, there’s the Tyler and Annie situation. Does Tyler have feelings for her? Do you think they’re better off as friends?
Carson Rowland: Carson as a viewer wants them together. I was talking to Sherryl and I said, “Name two characters that are like them in terms of their relationship.” She goes, “They’re the modern-day Jim and Pam.” That’s so true. Because the first couple seasons of The Office, everyone wanted them together, but they weren’t not together. I would love for them [Tyler and Annie] to get together, but I also love the conflict that brings when they’re not together. The audience wants something so much, but they’re just not getting it. Maybe they’ll get it down the road, maybe we won’t. We’ll see.

What do you think is holding Ty back from pursuing a romantic relationship with her?
Carson Rowland: I think it’s the gossip. I think there are just so many other things going on. I don’t think a relationship is really in the forefront of his mind at the moment. He does have a relationship with CeCe, but that’s more of just a distraction. Ty just cannot catch a break, and he just wants the world to be simple. He wants it to be the way it was before when Annie was just his friend and his mom and dad were still together. I think adding a relationship to that is really just too much for Ty at the moment. I don’t think he wants that. I think he wants to focus on baseball.

If Sweet Magnolias got a season 2, is there anything that you would want to explore with Ty that maybe the show wasn’t able to in the first 10 episodes?
Carson Rowland: I would love to see just the conflict with Annie pan out. There’s just such good drama there. It’s so rich, and their relationship stems so far back. I’m really curious to see where it goes and how the car crash affects that. But I would love to see the drama that ensues with Ty and Annie’s relationship.