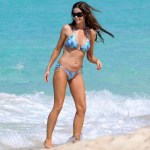 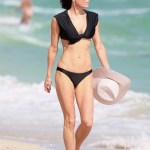 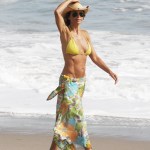 Ramona Singer stunned while relaxing hundreds of miles away from her hometown of New York City in a very revealing outfit!

Does Ramona Singer ever age? The 63-year-old made jaws drop in one of her newest Instagram photos posted on Saturday, May 9. She struck a fierce pose while luxuriating on a boat in the heart of Miami where the mother-of-one sizzled in a sleek blue leopard swimsuit that showed a ton of leg. “Enjoying the beautiful day in the sun. Excited for summer ahead. Sending everyone healthy and positive vibes,” she captured the sizzling pic. Fans lined up her comments section with repeated compliments on how “gorgeous” she looked while also remarking about how she continues to defy age with every snap she posts.

Ramona’s pal Kelly Dodd, 44, made a joke about her being in Florida as NYC was “cold AF” over the weekend. The Real Housewives of Orange County star has Ramona to thank for introducing her to fiance Rick Leventhal, 60. They met at a fabulous party in The Hamptons last summer, which then led to him proposing only months later after they began their whirlwind relationship! Kelly, who is known for her hilarious television moments, added another to her belt when she accidentally interrupted her man’s live television segment!

Season 12 of Real Housewives of New York City has been captivating its longtime fans over the past month. Bethenny Frankel, 49, who started on the show with Ramona and was a constant presence on it over many years, exited the series in 2019. “I think the past few seasons it got too dark. It’s light this season, it’s very light,” Ramona told us in March. “Without Bethenny it was a different kind of freedom to be together. It was a different energy. We’re all allowed to shine and show ourselves in different ways.”

Enjoying the beautiful day in the sun. Excited for summer ahead. Sending everyone healthy and positive vibes💙✨🦋

Sonja Morgan, 56, felt a little differently about the SkinnyGirl’s departure from the show. “I’m happy for her,” she revealed to us in December. “She made a choice for her daughter (Bryn Hoppy, 9), for her boyfriend (Paul Bernon, 41), I don’t want to speak for her. But she made a choice and I’m happy that she’s done that.”