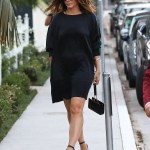 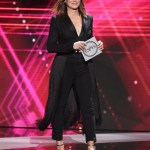 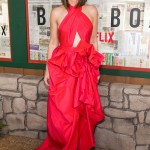 Sandra Bullock introduced her 8-year-old daughter, Laila to the world on the Mother’s Day episode of ‘Red Table Talk’ on May 8! The mother-daughter duo were all smiles while chatting with a special healthcare worker!

Laila Bullock has a bright future ahead of her! Sandra Bullock‘s 8-year-old daughter made her talk show debut on Jada Pinkett-Smith‘s Facebook Watch show, Red Table Talk on Friday. The Oscar-winning actress, 55, made a virtual appearance on the Mother’s Day episode to celebrate heroic mothers on the front lines of COVID-19. While speaking with a Los Angeles-based nurse named April Buencamino, Sandra revealed that Laila wants to help her community on the frontlines when she gets older.

“I have someone who wants to say something April, can she come say something?” Sandra asked, to which the ladies of the Red Table, along with the nurse, welcomed Laila with open arms. “Thank you, April for doing everything for everyone! Stay safe, and your family” a smiling Laila said, with the help of her mom.

Sandra went on to gush over Laila’s bravery. “She’s our world superhero. She’s the one who’s going to save the world in our family, so she’s ready to join you out there, April in a few years,” Sandra gushed over her daughter, who she adopted at the age of 3 in 2015.

Jada later announced that the Will and Jada Foundation will donate $50,000 to April’s hospital, as well as gift April’s family with the vacation of their choice. That’s when Sandra and Laila began cheering.

Sandra and boyfriend Bryan Randall recently donated 6,000 N95 masks to health care workers in Los Angeles. — Something April said was “one of the most exciting donations” her hospital received. Bryan shared the news on Instagram and revealed that Sandra’s two children were the ones who came up with the idea.

Sandra, who is also mom to Louis Bardo Bullock, 10, started dating Bryan in 2015. The actress adopted Louis in Louisiana in 2006, when he was 5-years-old. Laila was also adopted in Louisiana. The couple and Sandra’s kids are quarantining together in Beverly Hills.