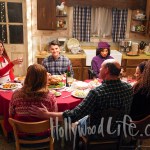 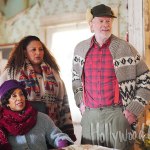 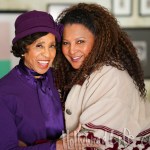 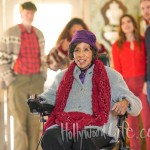 Who is pregnant? That’s the million-dollar question in the ‘Bless This Mess’ finale. HL has an EXCLUSIVE preview of Kay trying to figure out who is expecting.

Rio, Kay, and Janine all took pregnancy tests, but Rio mixed up the tests when she placed them in one of her many pockets during the tornado so no one knows who is actually pregnant. Kay decides to take matters into her own hands to fix this pregnancy mix-up in this EXCLUSIVE preview of the Bless This Mess finale. “Okay, I need to know which one of us is pregnant right now,” she says to Rio and Janine. She calls Rio “annoyingly sensitive,” which could be a sign of pregnancy. Rio quips that she’s actually “naturally sensitive” all the time.

Kay asks Rio, “How are your door knockers feeling, huh?” Rio has no idea what Kay is talking about, so Kay has to tell that she’s talking about her boobs. “You know the saying, swollen humps bring baby bumps,” Kay quips. Rio asks who says that. Kay simply replies, “God.”

Kay asks Rio and Jeanine to start giving their breasts a gentle pat. JT can’t believe this is happening in front of his eyes. Rio tells Kay that her boobs don’t feel any different. Jeanine notes that boobs feel itchy. Rio asks Kay if she’s happy after the boob check. JT is the one to reply, “Never been happier.”

The synopsis for the May 5 episode reads: “When a tornado touches down in Bucksnort, everyone’s concerns about their current situations are heightened. Mike and Beau are still at odds about their egg businesses and who will earn Dolores’ restaurant contract; and a mix-up with pregnancy tests leads Rio, Kay and Jacob’s girlfriend, Janine, to each think they might be pregnant.” The Bless This Mess finale will air May 5 at 8:30 p.m. on ABC.