Kristin Cavallari, 33, doesn’t think her estranged husband Jay Cutler, 37, is acting fairly in the wake of their split. The Very Cavallari star even ventured to slam Jay as “controlling and manipulative” throughout their nearly seven-year marriage, in new court documents that HollywoodLife has obtained! The insults were hurled in a “Motion For Partial Distribution,” which Kristin filed on April 28 to seek the funds needed to “purchase a residence” she would not share with Jay. Kristin’s latest court documents arrive after Jay filed an emergency motion in which he asks for Kristin to be prevented from “purchasing any additional real property without the Husband’s consent and approval.”

Kristin called Jay “controlling and manipulative throughout the marriage” in the court documents, because he allegedly “agreed for [Kristin] to purchase a home she has found but withheld the funds when [Kristin] would not accept the unfavorable settlement [Jay] was proposing.” In the court documents, Kristin accuses Jay of changing “his position” towards the purchase — a reported $5.5 million home in Tennessee — “several times.” However, the turning point in this argument allegedly happened on April 24, when Kristin claimed that Jay “objected to her purchasing the new home,” the documents claim.

Now, here’s the boiling point of this legal drama: according to Kristin’s motion, Jay “told her that his attorney was sending a letter to the financial manager telling him not to release the funds” that Kristin “needed.” Furthermore, Kristin claims in the motion that on April 28, Jay said he’d only agree to the purchase of the new house if she “agreed to his parenting plan.” However, according to the emailed filed with Jay’s motions, the financial manager did not in fact bar her form accessing the funds. 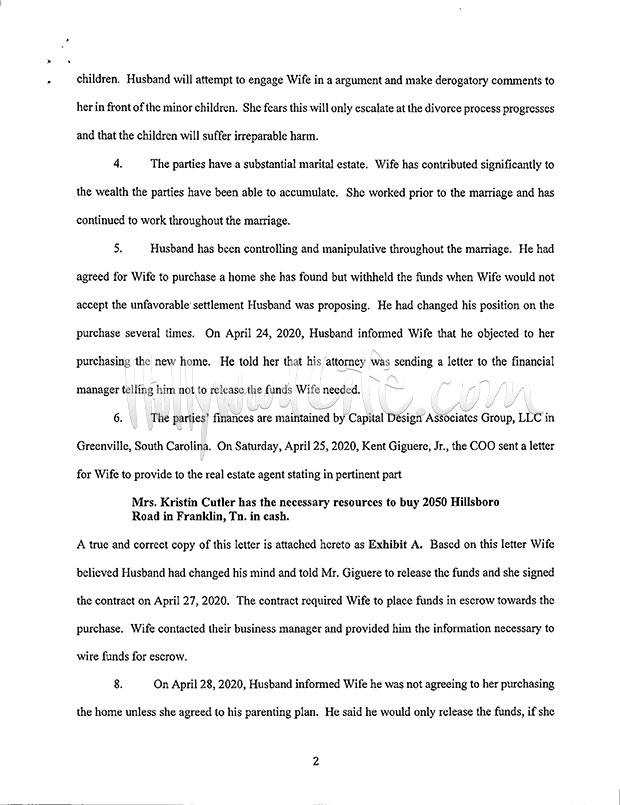 Kristin is fighting to distance herself from Jay, since according to the court docs, she believes that sharing the same roof creates an “unhealthy environment” for their sons Camden, 7, Jaxon, 5, and daughter Saylor, 4. Kristin even predicted that Jay will allegedly “engage” her in “[an] argument and make derogatory comments to her in front of the minor children,” and feared this “will only escalate” as their divorce draws out. If that were to happen, Kristin worried their children will “suffer irreparable harm,” according to her “Motion For Partial Distribution,” which was filed on April 28.

Meanwhile, in his “Emergency Motion” filed on April 28, Jay called the 6788 sq. foot house in Franklin, TN that Kristin is trying to move into a “completely frivolous and unnecessary expense.” They’re not only fighting over this potential purchase, though. Kristin is also seeking to be the “primary residential parent” after denying Jay was always the “available at home parent and primary caretaker” of their kids in her April 24 counter-complaint to Jay’s divorce filing. Meanwhile, Jay is seeking joint custody, according to his April 21 “Complaint For Divorce.” HollywoodLife has reached out to Kristin and Jay’s respective reps for comment, but we’ve yet to receive a response.

Unlike the heavy words being used in these court documents, the reality star and former NFL player said they have “nothing but love and respect for one another” in a joint divorce statement issued on their respective social media accounts on April 26. It looks like this divorce won’t be a quiet one, though.