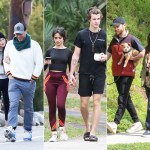 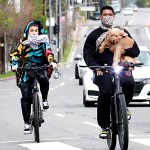 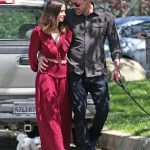 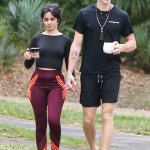 During quarantine, don’t forget your four-legged friends! While holding his precious pup close to his chest, Usher and his girlfriend, Jennifer Goicoechea, rode to the park to give his doggo some much-needed fresh air.

Usher forgot his helmet at home, but he didn’t forget his face mask when he went for a ride in Los Feliz, CA on Sunday (April 5) afternoon. The 41-year-old crooner, with his face wrapped up in a scarf to protect him from the COVID-19 coronavirus, wasn’t alone, either. He was joined by his girlfriend, Epic Records’ Senior Director of A&R Jennifer Goicoechea, and his dog, Scarlett! Usher clutched his beloved Goldendoodle to his chest while riding his bike down the street, giving Scarlett a makeshift blowout before arriving at a local park. While there, Usher and Jennifer pulled down their masks for a breather, while Scarlett relaxed on the soft grass. Afterward, the three went back home.

Jennifer and Usher have been dating on the low for a few months. Before the world turned upside down, the two attended the Vanity Fair’s Oscar Party together in February. He’s been a single man since splitting from his second wife, Grace Miguel. The couple announced their split in March 2018, but the divorce documents filed at the end of the year showed they officially called it quits in December 2017. “After much thought and consideration, we have mutually decided to separate as a couple. We remain deeply connected, loving friends who will continue supporting each other through the next phases of our lives.”

It was in 2018 that Usher opened up about his love for his Goldendoodle, Scarlett. He won her at a charitable auction, according to People, and since then, they’ve been practically inseparable. “She’s always chilling,’” he said. “She’s my road dog, man. Some of my hardest times, she is always there with me. … my boys, they love her. They don’t walk her, but they love her. She’s actually a very spoiled dog.”

Usher and Jennifer now become the latest celeb couple to take some time for some sun and exercise during the COVID-19 coronavirus outbreak. While many stars are observing self-quarantine during the pandemic, others keep up their exercise regimen for themselves and their pets. Ben Affleck and Ana de Armas took their dogs for a walk at the end of March. Dakota Johnson and Chris Martin went for a stroll with a precious pooch on a leash. Emily Ratajkowski and Sebastian Bear-McClard walked their dog, Colombo, on the streets of Manhattan. Even Lilly Collins and Charlie McDowell got some fresh air with their adorable, holdable dog.