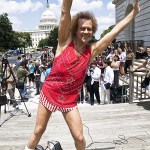 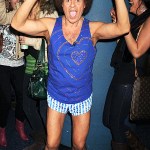 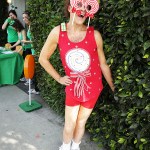 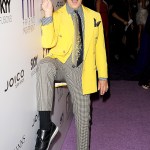 Richard Simmons wants you to ‘get up and move!’ The iconic aerobics guru made a major comeback amid the novel coronavirus pandemic, and is using his platform to encourage his fans to stay fit and motivated!

He’s back! On April 3, legendary fitness instructor Richard Simmons returned to his YouTube channel to share another exercise video from his heyday in the 1970s and ’80s, encouraging his over 11,000 subscribers to stick to a fun fitness routine amid the COVID-19 outbreak. The aerobics aficionado, 71, posted his first video in six years on March 11, just at the beginning of the height of the coronavirus outbreak in the United States. The first throwback clip featured Richard offering motivational messages to his devoted fans when his career had reached incredible popularity. Now, his latest videos — a collection of roughly 12, so far — feature Richard’s effervescent personality and enthusiasm for health and wellness as he does roughly 10-minute effective workouts that are perfect to do at home!

It also appears that Richard’s social media is back up and running, too! While his last tweet prior to the COVID-19 outbreak was in January, his recent tweets have been incredibly consistent, urging his fans to check out his YouTube channel and re-watch old videos of the fitness instructor and his crew busting a few moves and working up a sweat. “Get up and move,” Richard tweeted along with his latest video on April 3.

The resurfacing of Richard comes as a welcome surprise to fans, who have been clamoring for new content from him since he stepped away from the spotlight in early 2014. In 2017, reports even went as far to suggest that Richard was wearing disguises in order to enjoy some time out and about. There were even reports that the fitness enthusiast was being held hostage! Of course, those reports were completely put to rest when Richard’s rep at the time shared with HollywoodLife that there was “no truth to” the stories, whatsoever.

Regardless of the reason Richard is choosing to resurface, his timing couldn’t have been better! As millions of Americans continue to quarantine or live under strict stay-at-home orders from their state, having a bit of fun while staying active is just what the doctor — or in this case, Richard — ordered. Fans of the iconic fitness instructor can likely look forward to a lot of content from Richard in the days to come!