Zoë Kravitz, 31, made it clear that skin-lightening is not a part of her self-quarantine activities. That’s what one fan seemed to suggest after commenting on a photo of what the Big Little Lies star is actually doing during this period of isolation: hanging out with her adorable dog, Scout! “Self(ie) quarantine. stay inside kids. one day at a time,” the actress captioned the photo, shared on March 17. But the aforementioned fan veered away from the subject of the coronavirus outbreak.

“Am I wrong or she is looking so white in this picture, please don’t tell me you are getting ready [sic] of your melanin, you are so beautiful with your natural color,” the fan wrote in Zoë’s comments section. The actress — whose parents Lisa Bonet, 52, and Lenny Kravitz, 55, are half African American and half Ashkenazi Jewish — replied, “jesus. no girl. this is what happens to some of us mixed kids when we can’t go outside lol.”

While you quarantine in your home like Zoë, you can actually binge the actress’s latest show on Hulu! She stars in a new rom-com series called High Fidelity, which premiered on the streaming service on Feb. 14. Zoë plays a record store owner who’s trying to get to the source of what went wrong in her past relationships! 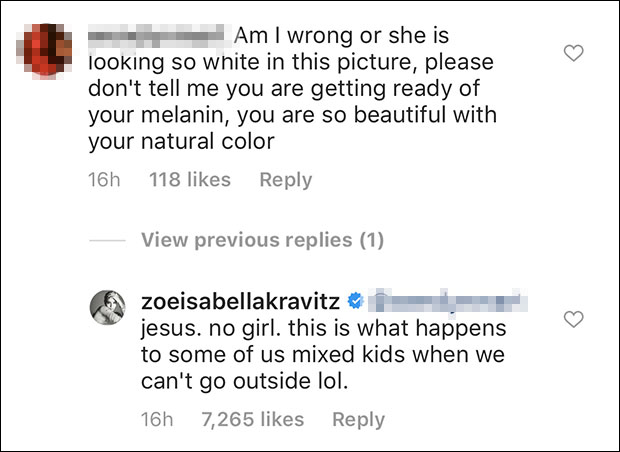 self(ie) quarantine. stay inside kids. one day at a time.

Zoë is also reportedly taking a break from filming The Batman, in which she’ll play Catwoman alongside Robert Pattinson’s Batman. Production for the DC reboot was put on pause after Warner Bros. “decided to halt shooting for the time being,” our sister website Deadline reported. To be clear, no one from the cast or crew has tested positive for the new coronavirus — Zoë’s in the clear!