Brad Pitt and Alia Shawkat sparked romance rumors over the weekend after they were spotted at a Thundercat performance at the Wiltern in Los Angeles. But, let’s pump the brakes on those dating rumors, because he’s still an eligible bachelor. Apparently, Brad, 56, isn’t interested in dating at the moment.

He doesn’t feel the need to get back into the dating scene right now, as his focus is elsewhere, sources tell TMZ. Right now, Brad is very much involved in his kids’ lives, and that is how he prefers to spend his time and effort, sources say, noting that he’s also focused on his work and sobriety. HollywoodLife reached out to a representative for Brad Pitt.

It turns out that Brad and Alia — who was dubbed as his “mystery woman” when the romance buzz swirled over the weekend — are just good friends. During the concert, the two were photographed sitting next to one another, but there was no visible PDA going on.  Neither Brad nor Alia publicly addressed the dating rumors. 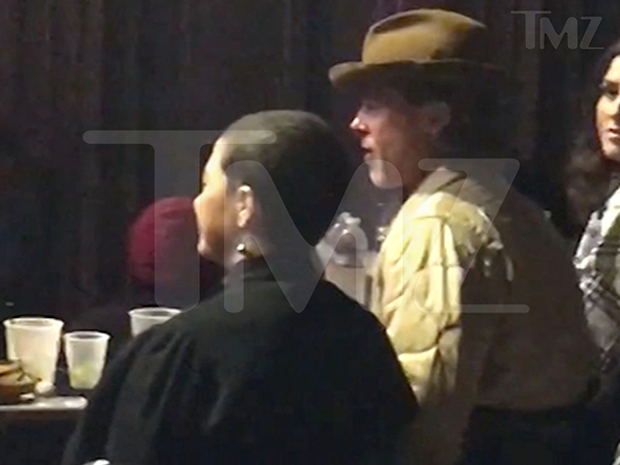 Brad Pitt and Alia Shawkat at a Thundercat performance at the Wiltern in Los Angeles on Saturday, March 7, 2020. (Courtesy of TMZ)

The actress, who is known for her work in Arrested Development and Search Party, was also seen at an art event with Brad last November. The friends were also spotted dining together at one point.

Brad’s last romance was with his ex-wife Angelina Jolie, who he shares six kids with — Maddox, 18, Pax, 16, Zahara, 15, Shiloh, 13, and twins, Knox, and Vivienne, both 11. Angie filed for divorce four years ago in September 2016. Angie has not moved on romantically since the split.

Meanwhile, Brad is aware that his every move is watched when it comes to his love life. During his speech for Best Supporting Actor for Once Upon A Time In Hollywood at this year’s Golden Globes, the actor acknowledged that he’s always “dating someone new.”

“I wanted to bring my mom, but I couldn’t because any woman I stand next to, they say I’m dating,” he joked, adding, “It would just be awkward.”