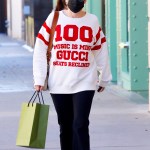 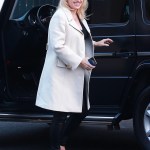 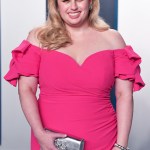 Rebel Wilson is serving some serious workout inspiration! The Aussie actor hit the gym after celebrating her 40th birthday at Disneyland — and she looks phenomenal.

Rebel Wilson is back in the gym after celebrating her 40th birthday! The Cats star first revealed her incredible weight loss transformation over a year ago in March 2019, but Rebel isn’t stopping now. The Aussie actress took to Instagram on March 5 to share a video of her gym workout, after indulging in a slice or two of birthday cake. “Okay too much quality birthday 🍰! Time to hit the gym and tear it up,” she captioned the video. In the clip, she sports black tights, and a long-sleeved black top as she does free weights, ab exercises on a medicine ball, and works her legs. The Britney Spears hit “Work B***h” plays over the sped-up video, which is definitely the ultimate workout song!

The actress has never been happier since her massive weight loss, a source revealed to HollywoodLife exclusively on March 4. “Rebel looks and feels amazing, all her hard work has paid off,” the source said. But Rebel’s fitness journey isn’t over yet — and the year has barely begun! “She’s not done, she’s feeling unstoppable,” our source continued. “At the beginning of the year she vowed to make this year all about being healthy, and she’s really stuck to that resolution and is reaping the benefits in every way.” Rebel vowed that 2020 will be “The Year of Health” in a Jan. 2 Instagram post, and she wasn’t kidding!

These happy feelings carried over into Rebel’s celebration for her 40th birthday, which took place at The Happiest Place On Earth. Rebel and her closest pals enjoyed the $15,000 21 Royal experience, which entails a high-class dinner in a New Orleans-themed private residence inside Disneyland’s park. The fun didn’t end with the gourmet entrees; Rebel and her entourage had a slumber party at the park! “The sleepover at 21 Royal was the perfect way to celebrate Rebel’s birthday because she’s a huge Disney fan, plus it was a once in a lifetime exclusive experience she won’t ever forget,” a second source exclusively told HollywoodLife. “Rebel has put in a lot of hard work this year and she looks absolutely incredible. She feels better than ever and her friends wanted to celebrate her because they felt she deserved to honor her birthday in a big way.”

Okay too much quality birthday 🍰! Time to hit the gym and tear it up x

It’s clear Rebel has been working hard and pushing herself. Her gym workout includes a five-round circuit program, which requires intense moves like the “Assault Bike” and “TRX Squats.” Rebel’s trainer, Jono Castano Acero, gave HollywoodLife a step-by-guide on how to execute Rebel’s workout in this EXCLUSIVE interview!