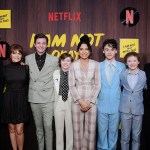 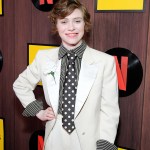 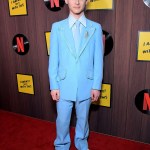 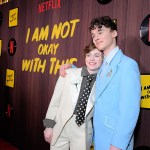 Kathleen Rose Perkins plays Sydney’s mom in Netflix’s ‘I Am Not Okay With This’ and spoke with HL about Sydney and Maggie’s unique mother-daughter relationship and why Sydney is a good role model.

Sydney and her mom, Maggie, have a complex relationship in Netflix’s I Am Not Okay With This. Maggie is a busy working mom juggling life as a single parent after her husband killed himself while Sydney is dealing with burgeoning superpowers and life as a typical teenager. They don’t have a close mother-daughter relationship but they are relatable. “It’s kind of cool that they just suffer no fools, both of them, and they just tell it like it is,” Kathleen Rose Perkins told HollywoodLife at the Los Angeles premiere of I Am Not Okay With This. “I like that a lot. It’s very honest. It’s a very honest relationship in that they don’t really like each other.”

Sydney, played by Sophia Lillis, isn’t the typical teenage heroine you see on TV. She’s awkward, quiet, and dealing with the highs and lows of life as a teenager. Kathleen thinks that Sydney is a good role model for young women today. “She is honest about who she is and even the things that she doesn’t know she’s honest to herself — maybe not to others around her at certain times — but she’s trying to figure things out and she’s not trying to be anything that she’s not,” Kathleen said. “I think that that is a really good role model especially young women in this country, specifically.”

Only two people in Sydney’s life know about her powers by the end of the season: her best friend Stanley Barber and her enemy Brad Lewis (only after he stole her diary). Her mom has no idea that her daughter has the ability to make someone’s head explode, which is what she did to Brad at the dance. HollywoodLife asked Kathleen how she thinks Maggie would react to Sydney’s powers.

“I mean, I hope that she gets really excited and is happy about them…” Kathleen said. “I would love to think that she’d be like, ‘This is so cool.’ But knowing Maggie, she might not be okay with it.” I Am Not Okay With This is currently streaming on Netflix.