Brad Pitt touched down in Paris just in time for Fashion Week! The Once Upon a Time in Hollywood actor, 56, was photographed at Paris-Charles De Gaulle Airport in Roissy on February 25 — just one day after the fashion festivities began the day prior. Paris Fashion Week lasts until March 3. And, if it’s distressed denim and casual vibes on the runways this season, then Brad was dressed for the part.

The father of six donned a pair of ripped jeans with a dark jacket over a white thermal top. He wore a brown fedora hat and matching sunglasses as he escaped the Paris rain under a red umbrella. Brad, who wore his headphones around his neck, carried a light colored backpack on his right shoulder with his cell phone in the same hand.

It’s unclear why Brad jetted off to Paris, however, he’s known to spend time there whether it’s work or pleasure. Nonetheless, the actor certainly deserves a nice getaway after a successful awards season. After taking some time away from the spotlight, Brad took the big screen by storm in the 2019 Quentin Tarantino film, Once Upon a Time in Hollywood, in which he played Cliff Booth. He took home the Oscar for Actor in a Supporting Role for the film, as well as the SAG Award for Outstanding Performance by a Male Actor in a Supporting Role. 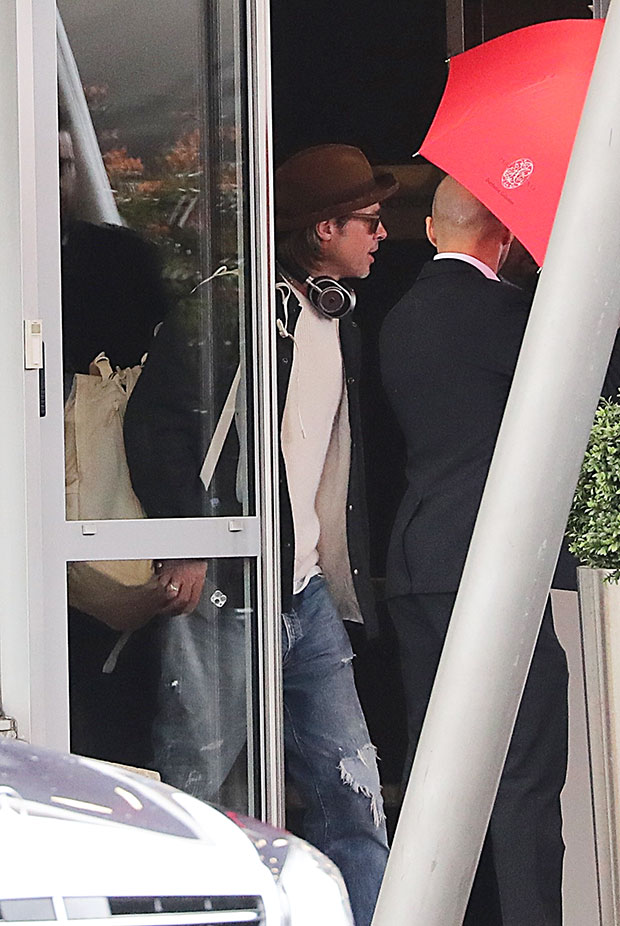 Brad Pitt at the airport in Paris on Tuesday, February 25, 2020. (Photo credit: BACKGRID)

While it’s already been quite a successful year for Brad, he has received some negative attention from President Donald Trump. During his acceptance speech at the Oscars on February 9, Brad referenced the end of Trump’s impeachment trial.

“They told me I only have 45 seconds up here, which is 45 seconds more than the Senate gave John Bolton this week,” he said. “I’m thinking maybe Quentin [Tarantino] does a movie about it. In the end, the adults do the right thing.”

The president later took aim at Brad during a rally at the Broadmoor World Arena in Colorado on February 20, where he told the crowd that he was “never a big fan” of the actor.