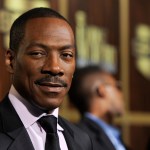 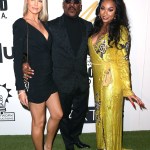 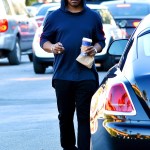 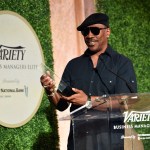 It’s a family affair! Eddie Murphy reunited with his ex-wife Nicole Murphy and their oldest daughter Bria, 30, at her art exhibition in Los Angeles on Feb. 20.

Eddie Murphy reunited with his ex-wife, Nicole Murphy, 52! The 58-year-old, and his former wife of 13 years, came together again to support their oldest child, Bria, 30, at her art exhibition in Los Angeles on Feb. 20 — and the pair couldn’t have looked prouder of her! Along with her family, Bria’s opening was also attended by Beyonce‘s mom, Tina Knowles, 66, and Will Smith‘s son, Jaden Smith, 21. Eddie looked super suave in an all-black ensemble including a turtleneck, embroidered suit jacket, and dark sunglasses. He stepped out on the red carpet with his fiancee Paige Butcher, 40, who matched the actor in a little black dress with a plunging neckline. She paired the thigh-hugging outfit with black pumps, fine silver jewelry and a black and white shoulder bag with chain detailing.

The woman of the hour, Bria, stunned in a floor-length yellow gown featuring a left leg split, and sequin detailing. She paired the low-cut dress with black and white Nike sneakers and wore a smoky makeup look with dramatic eyeshadow and a bold lip. She also accessorized with gold hoop earrings, long red nails and wore her hair in a half up-half down style. Her mom Nicole looked just as cool in a midriff-baring outfit which showed off her toned abs. She rocked black pants, a white crop top, and brown jacket, which she accessorized with a black fedora hat and oversized gold hoop earrings. The bronzed beauty also wore a pair of strappy brown pumps, which matched her jacket.

The star-studded opening of Bria’s exhibition at “Art 4 All” marked a rare reunion for her parents. Although they didn’t pose for photos together, the pair have not been seen in public at the same events very often since their 2006 split. The former couple were married from 1993 to 2006 and share five children: Bria and her younger siblings Shayne, 25, Zola, 20, Bella, 18, and Myles, 27. Eddie also has five other children with different women: he shares his first son, Eric, born in 1989, with Paulette McNeely, and his second, Christian, born in 1990, with Tamara Hood. After ending things with Nicole, Eddie began a relationship with Mel B. Their daughter, Angel, was born in 2007. He also had two children with his fiancée Paige, Max, 1, and Izzy, 3.

In December 2018, the actor shared a rare photo of all 10 of his children together! The pic marked the first time fans caught a glimpse of Eddie’s tenth child after he was born in 2018. In the shot, Paige is cradling the adorable newborn baby, who seems to be asleep peacefully in her arms. Paige and Eddie’s mothers are also front and center smiling in the pic, making it the ultimate family celebration.