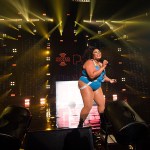 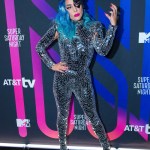 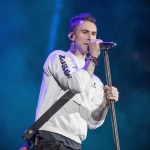 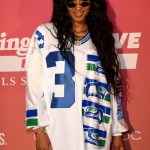 Ahead of the NFL’s biggest game of the year, Miami got really ‘super’ when Lady Gaga hit the stage for AT&T TV’s Super Saturday Night and made some bold comments about the upcoming halftime show.

Before the Kansas City Chiefs face on the San Francisco 49ers at Miami’s Hard Rock Stadium, Lady Gaga put the “super” back in Super Bowl. Gaga, 33, brought all the glitz, the glamour, the fame and the fury to AT&T TV Super Saturday Night, taking place on Feb. 1 at Miami’s Meridian at Island Gardens, and used the opportunity to boldly made a cheeky statement about her hopes for Sunday’s halftime show. “I better not here no lip synching tomorrow! I love you J.Lo, I love you Shakira!” the talented singer shouted to the crowd during her epic performance.

In addition to making the comment about the highly anticipated halftime show, Gaga wowed crowds with her incredible time on stage. The “Paparazzi” crooner wore various outfits at the show, including a metallic gold-colored bodysuit under a matching jacket and a sparkly purple bodysuit, and she stunned fans with the opening of her show, which mimicked her entrance to her own Super Bowl halftime performance three years ago. Her two hour-long set included many of her biggest hits, including “Just Dance”, “Bad Romance”, and “Telephone” and before she stepped offstage, she made sure to thank the audience for their support, which  has allowed her to put on her previous halftime performance in 2017 and sing the National Anthem at the Super Bowl in 2016.

There was some lingering fear that Gaga’s performance would get canceled due to bad weather. The same fate befell Harry Styles the night before. Ahead of Friday’s concert, fans were asked to leave the Meridian at Island Gardens just before Harry was to take the stage for the Planet Pepsi Zero Sugar concert. The Miami Fire Department enacted a mandatory evacuation due to severe thunderstorms, flash flooding, and other dangerous conditions. Harry later tweeted that he was “disappointed” and apologized to his fans, adding that the fire department wouldn’t allow the show to go on “under any circumstances.”

Thankfully, it seemed that everything was good to go for Gaga. “Lady Gaga’s performance at AT&T TV’s Super Saturday Night will be held tonight as scheduled at Meridian at Island Gardens,” the venue tweeted out, per the Miami Herald. The National Weather Service in Miami also noted that while it couldn’t rule out Strong or Severe storms during the Gaga show, they were expecting “a cold front to move through and the majority of [storm] activity would be ahead of that.” Meaning, most of the stormy weather would be out at sea by the time Mother Monster took to the stage.

“Year after year, in cities all across the country, we’ve built specially-curated venues from the ground up to provide both our mega-star performers and their adoring fans a one-night-only concert experience they will not forget. And this year will be no different,” said Valerie Vargas, senior vice president – advertising and creative services, AT&T, said in a statement. “In Miami, we’re going to go big and bold – two words synonymous with Lady Gaga. Throughout her career, she has undoubtedly delivered the most epic performances that have defined a generation.”

As for Gaga? She added that she’s “had some incredible experiences performing at the Super Bowl and am very excited to join the party again this year headlining AT&T TV Super Saturday Night!”