Super Bowl weekend is already off to a wild start. Offset apparently got into a bit of a scuffle on Thursday night when his wife Cardi B got an unexpected champagne shower at Booby Trap On the River strip club in Miami, as first reported by TMZ. In a video posted by TMZ, the Migos rapper, 28, appeared to jump off the stage, where he and Cardi were standing overlooking the club, and into the crowd where he allegedly began throwing punches, as seen in video footage obtained by the site. Meanwhile, the “Press” rapper, 27, stood on stage and observed the chaos, which was eventually broken up by club security. HollywoodLife reached out to a representative for Offset for comment.

Offset and Cardi were partying into the wee hours of the morning when champagne started to fly around 3 am, sources told TMZ, which noted that she was not happy about it. In the video, Offset appears to search for the champagne culprit and then flies into action moments after. The father of four apparently landed his punch on the individual who sprayed his wife with alcohol, club goers told the site, before he was pulled back by security. Cardi and Offset reportedly left the club following the incident.
Earlier in the night, things were more calm for the couple, who performed together at LIV nightclub in Miami Beach. Actually, it wasn’t that tame as the two were seen displaying NSFW PDA on stage. Cardi stuck her tongue out in various snaps and social media videos, which also captured the couple holding hands on stage.

Cardi showed off her amazing curves in a hot pink and black snakeskin mini dress. She rocked a matching straight wig with front bangs and two top knots. The mom of one owned the stage in a pair of black platforms that buckled all the way up to her thighs. Meanwhile, Offset, sported a head-to-toe denim look and white sneakers. He tied back his long locks, rocked a bunch of diamonds and donned a baseball cap. 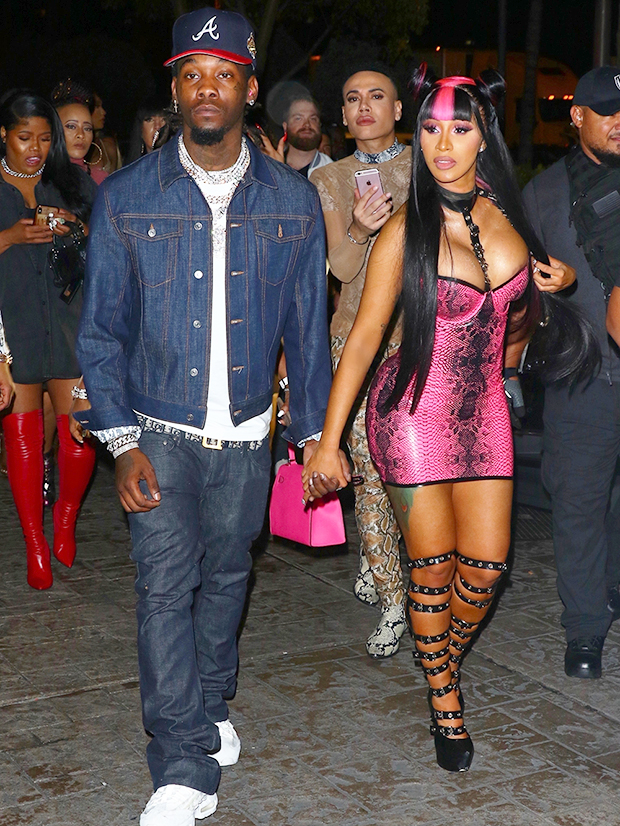 The club altercation came just a few days after Offset was temporarily detained at a Los Angeles shopping mall, TMZ reported, citing law enforcement sources on Jan. 30. The rapper was reportedly detained after police responded to a report of someone with a firearm in a parking complex at The Grove. The outlet reported that police found two guns and brought the group in for questioning, but released Offset soon after when two of the other detainees said the weapons belonged to them.

After being released, Offset told TMZ that police had the “wrong guy,” but eventually found who they were looking for. The outlet reported that two men in Offset’s circle of friends were booked on firearms charges.