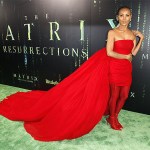 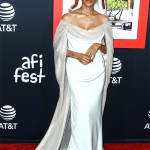 Jada Pinkett Smith took her blonde to a new level for the new year! The ‘Red Table Talk’ host wowed fans with her new hair color, even more extreme than the last time she dyed her curls.

We’ve never seen Jada Pinkett Smith, 48, this blonde! Well, maybe not since the premiere of Tales from the Crypt: Demon Knight in 1995. The Red Table Talk host revealed blonder, almost platinum hair to her 9.7 million Instagram fans on Jan. 7. Jada simply captioned the new look with a red lips emoji, but she didn’t have to say much — the glam did all the talking. Paired with golden bronze eye shadow and a nude lip, the hair makeover made fans leave comments like “I love this look 😍” and “GORGEOUS 😍.”

Jada actually made the transition to her ’90s-esque “sandy blonde drip” in early 2019, which is how she described her light pixie ‘do in a post from March of that year. The Facebook Watch host would alternate the style with long, (still blonde) braids throughout the year, and even turbans. But the latter styling method, along with the shorter haircuts, actually came about after Jada underwent a “terrifying” change, which she revealed in 2018.

“I’ve been getting lots of questions about why I’ve been wearing this turban. Well, I’ve been having issues with hair loss,” Jada revealed in a May 2018 episode of her talk show, Red Table Talk. “And I’ll tell you it was terrifying when it first started. I was in the shower one day and then just handfuls of hair, just in my hands, and I was like ‘Oh my God, am I going bald?'” The actress recalled “literally shaking with fear” from the incident, and then revealed, “That’s why I cut my hair and continued to cut it.”

We can’t wait to see what hairstyle Jada will rock on the big screen if she returns for The Matrix 4, which she was reportedly in negotiations for in Oct. 2019, according to a Deadline report from that month (the project is currently listed on her IMDb page as well). As the character Niobe, Jada’s hair was styled into Bantu knots for The Matrix Reloaded (2003) and The Matrix Revolutions (2003).