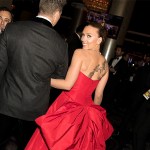 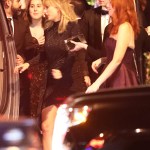 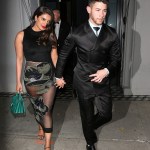 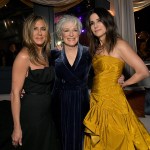 After the party is — the after-party, of course! Celebrities hit up a number of different parties following the Golden Globes on Jan 5, and we rounded up some of the best looks right here.

The Golden Globe Awards are one of the more fun, laid back award shows of the season, which means the after-parties can get pretty wild, too! Following the award show on Jan. 5, the stars continued the fun at various after-parties throughout Hollywood. Some celebs stayed in their red carpet looks from the show, while others changed into entirely new get-ups to party the night away. With tons of awards given out, it was definitely a cause for celebration, and you can click through the gallery above to check out some of the after-party pics.

Taylor Swift was one of the first stars to arrive at a post-show bash. She showed up to an after-party looking ready to enjoy cocktails in her gorgeous green gown with yellow floral designs. Scarlett Johansson, who wore a gorgeous strapless red gown, and her hunky man Colin Jost, who wore a black suit, were also seen taking in the sights after the show. Reese Witherspoon was also spotted having fun after the ceremony in her eye-catching white gown. Jennifer Lopez and fiance Alex Rodriguez stayed close at a bash and also looked stylish and attractive new couple Rachel Bilson and Bill Hader were seen holding hands while heading out to go to a party.

There were nine main-after parties following the Globes. They were hosted by Disney, WarnerMedia/HBO, Amazon Studios, Netflix, NBCUnivesal, Warner Bros./InStyle, CAA, UTA and WME. Some stars stayed at one bash the entire night, while others party-hopped around town, making appearances at more than one event and making the most out of their nights.

This is just the beginning of awards season, and there’s plenty of more fun to come! Next up are the Critics’ Choice Awards on Jan. 12, followed by the SAG Awards on Jan. 19, the Grammy Awards on Jan. 26, and, the biggest of them all…the Oscars on Feb. 9. It’s going to be a fun few months!