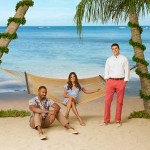 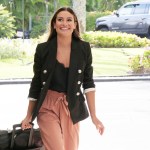 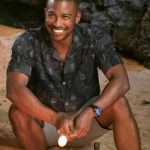 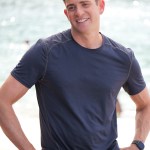 There’s nothing quite like a love story during the holiday season. The TV movie Same Time, Next Christmas premieres Dec. 5 at 9 p.m. on ABC and stars Lea Michele, Charles Michael Davis, Bryan Greenberg, Nia Vardalos, and George Newbern. The film follows Olivia Anderson, played by Lea, a successful young woman who met her childhood sweetheart during her family’s annual Christmas visit to Hawaii. After being separated by distance and years, the two reunite at the same Hawaiian resort years later and their chemistry is instantly rekindled. Charles plays Jeff, Olivia’s childhood sweetheart.

HollywoodLife talked EXCLUSIVELY with Charles about Jeff and Olivia’s connection. “They start out as kids just getting to know each other and being comfortable with each other,” Charles said. “And then out of that a strong bond and affection grows, which turns to love. But it’s timing. So Jeff’s journey is a bit of just settling in for him and, for both of them, about how they feel about each other since the beginning and just working through the challenges of their adult lives that got a little complicated.”

Charles revealed Lea actually ran into his Younger co-star Hilary Duff before they started filming. “Lea ran into Hilary Duff at an event and Hilary was just like, ‘I heard you’re trying to feel my man.’ It became this competition. So Hilary texted me and goes, ‘Guess who I ran into?’ And I told her to give Lea my number. We just texted back and forth. I actually didn’t get a chance to physically meet her until we were actually in the lobby of the hotel resort. Ss soon as I saw her it was just like seeing an old friend.”

Charles loves that the “script is really built around feel-good emotion and it’s just fun. It’s beautiful and it’s really ornate. It’s like a beautiful orchid or a flower.” He also feels that the movie gives off a Julia Roberts vibe. “I say that because she’s so charming. Lea and I hope that we both come across like Julia Roberts in the film where it feels charming, too,” Charles continued. “I think when the audience watches it, they’re just going to be watching it and smiling.”

Holiday movies are really having a moment right now and Charles opened up about why he thinks that’s happening. “Nostalgia is having a resurgence,” Charles said. “I think because when we were kids, it was big to watch. I grew up in the Midwest, and so when the holidays kick in, you just settle in. I think as we all got older and became adults and now we’re the ones who are telling the stories and making the movies, we want to tell the stories that we remember growing up and the feeling that we got from them, too, especially during the holidays.” Same Time, Next Christmas will also air on Freeform at 8 p.m. on Dec. 11.