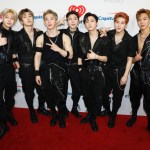 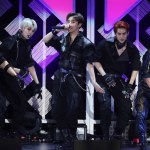 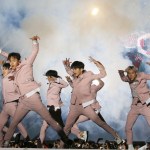 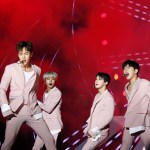 Not so fast, Wonho! After the lead singer of the beloved K-Pop band, MONSTA X, announced he was leaving the band, the fans came together to show their loyalty in a huge way.

In just a few short hours after Wonho announced his departure from MONSTA X, fans from around the globe took to social media, pleading for the lead singer to stay with the group. Shortly after it was confirmed by MONSTA X’s label  Starship Entertainment that his contract had been terminated on Friday, Nov 1, the fans got right to work campaigning for Wonho to stay, getting hashtags like #ShrineforMonstaX and #FightForMonstaX7 trending worldwide. But that was just the beginning.

One fan, going by the name Monbebe, has organized a campaign buy a billboard in Times Square that will beg Starship Entertainment to let Wonho back into the group. A  GoFundMe page was launched, with the original goal being $10,000 to buy a massive ad that would run for ’21 hours, a 15 second spot, 30 times per hour,’ according to the page. In the first hour, the campaign raised more than $13k; at press time, it’s raised over $23k. It would seem like the fans are well on their way in making a huge statement to the label!

But why is it necessary? The reason for his abrupt departure remains unclear, even after Wonho released a statement of his own following the announcement. “First, I would like to apologize for not being able to keep the promise that I would only provide good memories to our fans and for causing them pain. Furthermore, I apologize for causing concern to many people due to my personal issues,” he wrote, according to Soompi. “I am apologetic for causing harm to the members due to the unfortunate issues related to me. More than anything, I am sorry for disappointing my fans who believed in me. I have reached this decision after seeing many people having a hard time because of me.”

While there are only allusions to the fact being he was let go from the group due to certain behavior prior to the formation of MONSTA X, no one is saying anything concrete. As for the label, they have yet to address the fans outpour of devotion to keeping the band intact, save for their initial statement. “We regret to announce this disappointing news, especially to the amazing MONSTA X fans who have always supported and cared for the group. We promise to return with better music and stage for MONSTA X fans,” the statement from the label said on Thursday, Oct. 31. Well, the fans certainly are letting their voices be heard. Let’s see if the label listens!