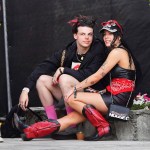 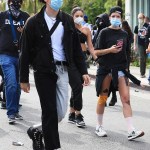 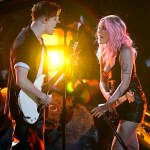 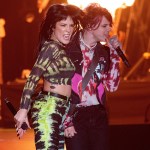 Just two days after Halsey made her red carpet debut with Evan Peters, she took to social media to set the record straight on why her last romance — with Yungblud — fizzled out.

Halsey has no bad blood with her ex, Yungblud. In a now-deleted tweet — which was screen-grabbed by a fan and posted on Instagram — the singer seemingly opened up about the reason behind her most recent breakup. “Sometimes. People just break up,” Halsey wrote. “It doesn’t mean someone cheated or something bad happened or someone f***ed up. Sometimes. It just happens. Because life is constantly changing. And adults stay friends and move on.” Halsey didn’t mention Yungblud by name in the message, but the timing is quite interesting, as it came just two days after Halsey attended the American Horror Story 100 Episode Celebration with her new beau, Evan Peters.

Although Halsey and Evan first sparked romance rumors when they were seen holding hands at Six Flags in mid-September, this Oct. 26 red carpet event was the first time that they went fully public with their relationship. It got fans talking about what could’ve happened between Halsey and Yungblud, since the couple had never confirmed a breakup. Likely, this chatter is what pushed Halsey to take to Twitter to set the record straight, even though she eventually deleted the tweet. Still, it appears that she and Yungblud remain on amicable terms following their September split.

Meanwhile, being with Evan is a longtime fantasy for Halsey. Back in 2013, she tweeted about her crush on the actor, writing, “Petition for Evan Peters to date me” at the time. Well, fast forward six years — and her wish has come true!

Halsey was previously linked to G-Eazy, while Evan was with Emma Roberts on and off for more than six years. The two even got engaged in 2014, but they called their relationship off at the beginning of 2019. Emma has since been dating Garrett Hedlund.